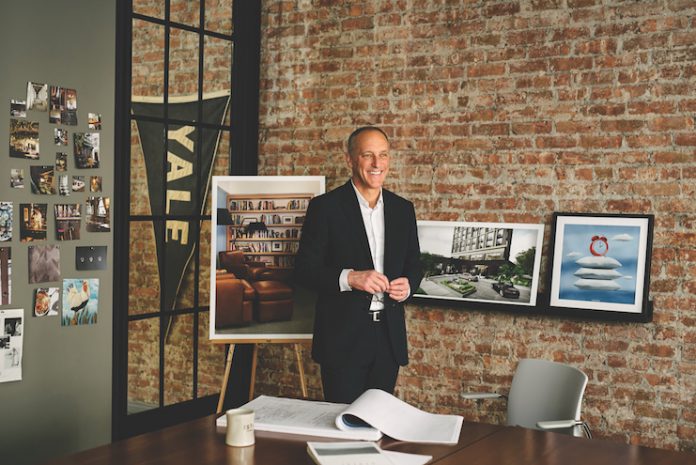 Paul McGowan is the owner of Hospitality 3, LLC, a hotel design, development, and operations company. He was also one of the first to develop a brand around the needs of university markets, a now highly sought-after segment of the industry. As he told LODGING, while tracing his path to success in this special niche, it was his own experience as a father visiting college campuses with his college-bound daughter that was the inspiration for Study Hotels, the first of which was founded in 2008, on the Yale campus in New Haven, Conn.

Like so many in the industry, McGowan didn’t have hospitality in his career crosshairs at first. With a background that combined architecture, engineering, and design, he worked first in the Boston area for a real estate developer, before joining ITT Sheraton, which then had 750 hotels worldwide. Among those hotels, he says, there was a franchise network of more than 500, many of which were below standards and in need of an upgrade. “That turned out to be a tremendous growth opportunity for me. In the process, I learned a lot and gained an appreciation for what it takes to own real estate as an independent hotel operator. I also gained an understanding of the rules of the franchise world—how brands are managed and updated as they evolve.”

He then moved into the project development side, managing large-scale projects for ITT Sheraton and some of its partners. When the company was purchased by Starwood, he began working in a similar capacity on the Westin brand as well as Sheraton.

His next company move was to the position of senior vice president of design and construction of the W Hotel brand in the early stages of its launch, which was at a time when the company was challenging industry paradigms and creating a new identity. “In the first three years, we opened some 14 hotels under the leadership of Barry Sternlicht, who was visionary in breaking down some of the rules we’d lived by for years. We started putting showers in hotels instead of tubs, getting rid of heavy draperies, and removing layers that detracted from the clean and contemporary lifestyle slant we were trying to take with W.”

The W brand, he says, served as a precedent for the Study Hotels brand he created shortly thereafter. “It wasn’t so much about creating luxury—which I always thought was overstated—but the idea of simplifying our business. This approach was more interesting to me. When creating Study Hotels, we were very careful to not position it as being pretentious; we wanted the brand to be approachable and down to earth, with a touch of luxury in the areas that mattered most to our guests.”

That type of hotel was definitely not something that McGowan encountered before 2008, when he and his daughter Lauren were touring colleges. “At one of the country’s most elite college campuses, the hotel choices were dismal. When I saw it was much the same on other campuses, I realized a void existed; there was an opportunity to bring upscale lodging to high-end university markets, where so many potential guests—alumni, parents, visitors—were well traveled and looking for a different experience.”

It was about that time, McGowan says, that he fell upon a real estate opportunity on the Yale Arts Campus in New Haven. “It was a tired 86-room hotel built in 1961, and despite its remarkable location, it had not exceeded 60 percent occupancy at $105 average rate.”

“I like the social aspect of hotels, how they bring people together.”

Although he would have preferred a market with stronger fundamentals, he believed the kind of repositioning he had been doing for W and the Sheraton properties before—combined with a growing desire among university consumers for an elevated experience—could change all that. “The challenge was not only to figure out how to position that hotel, but how to develop a full-service model to take forward into other markets. It became clear that each university I visited had a unique character and personality that was prevalent every time we stepped on campus.”

He made some assumptions about how to proceed. “The idea that people want to celebrate the college experience was an important differentiating point—offering the opportunity to take in the culture of the university during a stay and identifying that most people visiting college campuses are there for some sort of intellectual experience. Above that, we needed to figure out how to provide a clean, simple, gratifying experience.” McGowan says, too, that he rejected the limited-service model. “I thought we should offer all things expected in an upper-upscale, full-service hotel—that is, a restaurant, catering, banquet facilities, room service, and more.”

So, he began to create the prototype that became successful in New Haven. “Our first Study Hotel was well styled and offered a very comfortable sleeping experience with high-quality bedding, a great shower, and inspiring public spaces; there were places to convene, be communal, and to allow celebrations to occur for families, visiting professors, and anyone coming into the market who is affiliated with the university.”

The brand, he says, is represented by its slogan “read, rest, reflect” and icon—a pair of reading glasses, such as would be left on a table after enjoying a good read. “We landed on the idea of providing an environment that allowed people to enrich themselves, then kick back, relax, and reflect while enjoying the comforts of a uniquely distinct hotel.”

McGowan says being centrally located is an essential element in the experience he aims to create. Through partnerships with the universities, McGowan has been able to purchase or lease land to offer a unique university experience in each of the three properties—including the Yale property, a newly opened Philadelphia hotel between the campuses of the University of Pennsylvania and Drexel University, and a hotel in development on the University of Chicago campus, which is slated to open in 2021. “This will be an amazing hotel, with views of the Rockefeller Chapel, and only a few blocks from the proposed Obama Presidential Center. It will be adjacent to the Rubenstein forum, a conference center being built on campus.”

Study Hotels founder Paul McGowan says it isn’t rocket science to find ways to create stimulating and relaxing experiences for someone seeking accommodations while visiting institutions of higher learning. “What we found across the board is that brands tend to complicate the guest experience by trying too hard to define themselves. Our goal is to understand what our customer wants and keep it simple. Unlike many other brands that charged extra for ‘amenities’ such as WiFi and bottled water, we opened The Study at Yale in 2009, offering both free of charge. We believe when you book a room at one of our hotels, you shouldn’t be hassled with fees/extra charges for the basics. We put a lot of energy into keeping things simple and seamless when it comes to the guest experience.”

Although competitors quickly hopped on the college market bandwagon, McGowan has proceeded slowly and deliberately. “We are choosing our opportunities carefully, finding locations where we can add real value to the university experience, where we can be a long-term partner and become an integral part of the school’s culture,” he notes. “This is meaningful work that we take very seriously.”

McGowan says he continues to find the hospitality industry fascinating. “I like the social aspect of hotels, how they bring people together, and what they mean to the location they’re in—the role they play in society by allowing people to have a meaningful connection within a hospitality environment while being able to walk out the door and experience the benefits of a campus, city, or whatever the location might offer.”

Study Hotels to Open at Johns Hopkins University in Baltimore

Study Hotels To Open Its Third Property in Chicago in 2021

What’s So Special About College Markets?

After the Boom: Smart Investment Strategies for Today’s Reality