What many people first see when looking at the picture below from the 1949 Hilton Hotels Managers Meeting is a long table full of men, which is nothing unusual for the time period. Then, upon closer inspection, one might notice that in the left front corner of the image there is a single woman sitting at the table. This woman is Merriel Abbott. No, she was not a stenographer taking notes, and she was not the person in charge of the housekeeping departments, both the traditional routes for women climbing the hospitality corporate ladder in the 1940s. Rather, Abbott led entertainment in the dining and showrooms at Hilton Hotels across the country.

What was Conrad Hilton’s reason for employing a woman to manage the entertainment business in his hotels? Typical of Hilton, he wanted results, and Merriel Abbott had proved herself as the manager and choreographer of the Empire Room at Hilton’s Palmer House Hotel in Chicago. In a male-dominated industry, Hilton was willing to promote women when he saw success was the ultimate outcome.

So, who was Merriel Abbott? Her background was in entertainment. She had opened a dance school in 1922 and operated it for twenty years before shutting it down in 1942. In 1933, she created a dance troupe known as the Merriel Abbott Dancers, who performed dance and acrobatic routines at the Palmer House.

Abbott was also known as a taskmaster. The stories go that she would weigh her dancers once a week, and for each pound a dancer gained, she would be fined $5. As harsh as this seems, Abbott’s dancers were extremely loyal and proud to be identified as one of hers. In fact, many would go on from Abbot’s dance troupe to Broadway and Hollywood. 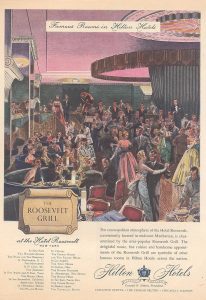 In 1937, Abbott took over the responsibility of managing the entertainment of the Empire Room at the Palmer House, a position she continued to hold after Conrad Hilton acquired the hotel in 1945. Hilton was so impressed with her management of the various entertainment acts—not to mention her dance troupe—that he appointed her Director of Entertainment for his growing hotel chain. The significance of this promotion is hard to imagine today with the breadth of entertainment competing for viewers’ attention. In 1947, however, television was in its infancy, and live performances and motion pictures were the entertainment outlets available to the public. Furthermore, the Empire Room, like other entertainment venues in hotels across the country, was very popular and profitable. That Hilton entrusted this valuable revenue stream to a person who happened to be a woman was almost unheard of during that era.

Perhaps the best example of Abbott’s business acumen was her proposal for entertainment for the Palmer House and the Stevens Hotel (now the Chicago Hilton), two large Hilton properties in downtown Chicago. Abbott recognized they were competing against each other for the same dollars. Her idea was to put an ice dancing revue in the Stevens Boulevard Room so as to differentiate the shows offered by the two hotels. This change was hugely popular and profitable.

Abbott, recognizing the publics changing tastes in 1957, disbanded her dancing troupe and pulled back the entertainment shows from various Hilton properties. She remained in her position at the Palmer House until her death in 1977 at the age of 84.