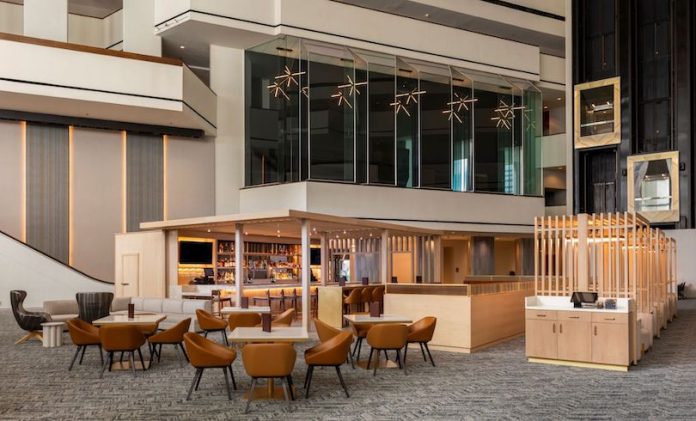 “As 2020 has come to an end, and with new opportunities in 2021, we are thrilled to usher in a new era for Hyatt Regency Houston as we announce the completion of an extensive renovation project,” said John Schafer, the hotel’s new managing director who recently joined the property from Grand Hyatt New York. “The hotel was thoughtfully redesigned with today’s modern travelers and executives in mind, while incorporating odes to artist influences from throughout the state, and reflecting Houston’s reputation as a world-class destination known for its rich history and modern innovations. With the updates now complete, we are excited to reintroduce the hotel as a one-stop destination that blends top-notch hospitality, world-class dining, and high-end meeting facilities paired with modern comforts and conveniences for business and leisure travelers alike.”

The hotel’s lobby was redesigned from a traditional check-in counter to individual stations backdropped by a 30-story atrium. This update was influenced in part by the famous artist haven of Marfa, Texas, where artists are often known for creating installations from existing architecture.

On route to their rooms,  updated corridors have new carpeting and a refreshed color palette of gray, blues, and deep rose petal hues.

Renovated rooms have an updated color palette and tones influenced by artist Mark Rothko, who is known for abstract expressionist art and whose work is housed at Menil Collection, located blocks away from the hotel. In a nod to Rothko, a headboard light shines on a blue-gray accent wall, which gives the effect of a subtle variation in tone. The rooms were also outfitted with new Smart TVs that allow guests to sync their mobile devices for customized streaming capabilities.

Serving as the focal point of the hotel’s atrium, the LobbiBar was redesigned to occupy the majority of the hotel’s first floor. The updated bar has distinct seating zones designed to create a sense of intimacy in the 30-story atrium space, with table seating surrounded by wood-canopied booths lining the perimeter. The bar itself is covered by a slatted-wood canopy to create the illusion of a ceiling in the towering atrium, and the countertop is made of quartz for a bright, clean look.

The hotel’s signature restaurant, Shula’s Steakhouse, was reimagined with a Scandinavian contemporary aesthetic that incorporates warm, neutral, and earth tones. Dark wood is used to enhance the space and create texture with stalled-wood ceilings and tambour-clad columns. The restaurant was also redesigned to create three distinctive dining areas, including a private dining room decorated with white and black tile floors reflective of a modern French Bistro.

Additionally, the on-site Einstein Brother’s Bagels was updated with a blue and white palette and light wood accents throughout the restaurant. It showcases minimal corporate branding, which marks an updated look for the company.

As part of the full renovation, the hotel updated its meeting spaces with increased broadband capacities to assist with hybrid meeting functionality. Each of the meeting spaces was outfitted with new carpeting, wall vinyl, and modern LED light fixtures.

Industry News LODGING Staff - May 18, 2021
ATLANTA—Officials of Castell Project, Inc., a 501(c)3 nonprofit organization dedicated to accelerating the careers of women professionals in the hospitality industry, released the Black...

Brands LODGING Staff - May 18, 2021
PARSIPPANY, New Jersey and AUSTIN, Texas – Wyndham Hotels & Resorts, with over 8,900 hotels across nearly 95 countries, announced the roll out of...

Amenities Kate Hughes - May 18, 2021
Of all the disruptions the hotel industry has borne since the start of the COVID-19 pandemic, one of the biggest was the upending of...