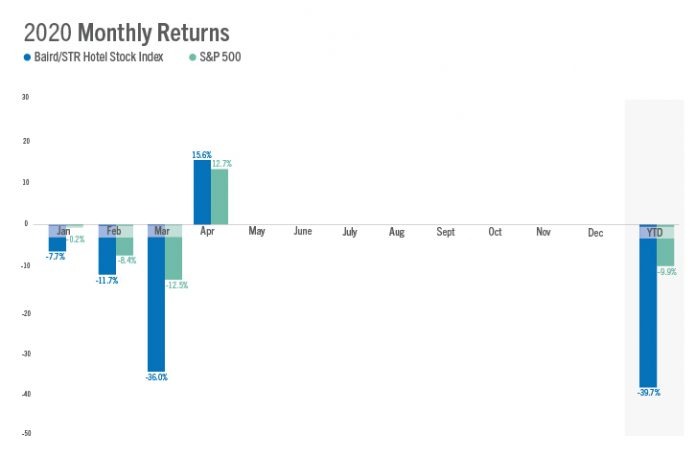 HENDERSONVILLE, Tenn., and MILWAUKEE — The Baird/STR Hotel Stock Index rose 15.6 percent in April to a level of 3,177. Year to date through the first four months of 2020, the stock index declined 39.7 percent.

“Hotel stocks rebounded in April following one of their worst months on record, but the stocks remain well below levels seen earlier this year,” said Michael Bellisario, senior hotel research analyst and director at Baird. “Worst-case zero-occupancy scenarios have not unfolded as investors had feared, and the hotel companies have significantly bolstered their balance sheets with credit facility draws, bond offerings, and points pre-sales, which afford plenty of breathing room on the liquidity front until hotel demand begins to materially rebound.”

“U.S. weekly data for the latter portion of April has provided hope that levels seen earlier in the month were the performance bottom,” said Amanda Hite, STR president. “While there have been modest demand gains over the last three weeks, the level of hotel business remains at incredible lows. Certainly, there is good news in slight demand increases versus further steep declines, but uncertainty will persist for the industry even as businesses begin to reopen and distancing limitations are eased. Hotel companies have released new cleaning protocols which should give guests a sense of safety as travel demand resumes.”

April performance of the Baird/STR Hotel Stock Index outperformed both the S&P 500 (up 12.7 percent) and the MSCI US REIT Index (up 8 percent).