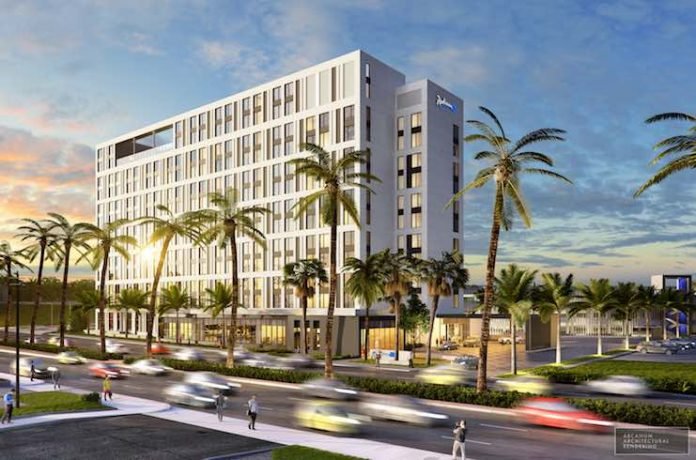 Anaheim, Calif.—George Smith Partners, a commercial real estate capital markets advisor, has secured a $115 million non-recourse senior construction loan for the ground-up development of a 326-key, four-star Radisson Blu hotel in Anaheim, California. The hotel, located at 1601 S. Anaheim Boulevard and situated within the Disneyland/Anaheim Convention Center submarket, will be one of the few four-star offerings available outside of the Disneyland Park and help to serve the submarket’s 28 million annual visitors, who spend more than $12 billion in the area each year. The property is expected to be complete in mid-to-late 2020.

George Smith Partners’ Malcolm Davies, principal and managing director, and Zachary Streit, vice president, along with other members of the Davies Group in Los Angeles, secured the loan on behalf of the borrower, BPM Real Estate Group, a commercial real estate development and property ownership group.

“This is one of the most well-located development sites in Orange County,” said Davies. “We’re very excited about this property’s excellent prospects and were thrilled to work so diligently with BPM and 3650 to drive the value of this project and identify a solution that would work for all parties involved. We feel we assembled the right team with the right understanding of the property and we look forward to continuing our work together.”

Streit added, “While there are nearly 300 Radisson Blu luxury hotels worldwide, the Anaheim Radisson Blu will be only the fourth of its kind in the United States. By working closely with the sponsor and Radisson, we were fortunate to support the rapid expansion of the brand by helping to capitalize this endeavor.”

The new development will have a modern design and a focus on family-friendly amenities. Nearly one-half of the guestrooms will offer bunk beds. The property will also have a ground-floor swimming pool with food and beverage offerings, as well as a rooftop pool deck, which will deliver views of the famous Disneyland nightly firework show and surrounding areas.

“The ambiance and visibility from this property will be like nothing else in the market,” said Walter C. Bowen, founder and CEO of BPM. “We recognized the opportunity to harness the power of Anaheim’s compelling fundaments, while also introducing a leading global brand to this sought-after tourism destination.”

“This investment is well-aligned with our core principles and national lending platform, through which we seek out and invest in opportunistic investments that are poised for deep value creation in the years ahead,” said Roth of 3650. “We believe in this development, and recognize the value in this sponsor, the Radisson Blu brand, and the financing team at George Smith Partners.”

The Anaheim market has benefitted from increasing hotel occupancy for the past several years—up from 78 percent in 2012 to 85 percent in 2017. Tourism in the city has posted consecutive growth for five years, setting a new city record each year. In 2017, the city welcomed 24.2 million visitors, a five percent increase over 23 million visitors in 2016.

Prominently located near the Anaheim Resort district on Interstate 5, Radisson Blu Anaheim will be within walking distance to Disneyland resort’s main entrance and the soon-to-be-open Star Wars Theme Park, along with many event venues. The hotel will support the growth of the Disney experience and complement Anaheim’s leadership in the tourism industry.

For added convenience, there will be a 353-stall garage offering guests plenty of onsite parking. The top level of the hotel will have an outdoor rooftop restaurant, bar, and social pool with panoramic views of Anaheim and evening Disneyland fireworks. The ground floor will include a three-meal restaurant and lounge, which will be adjacent to a more family-focused pool area including children base activities, cabanas, and more. A coffee shop, fitness center, gift shop, and two boardrooms are additional planned amenities.

The Radisson Blu at Downtown Anaheim is being designed by GBD Architects. Swinerton Builders will serve as general contractor.