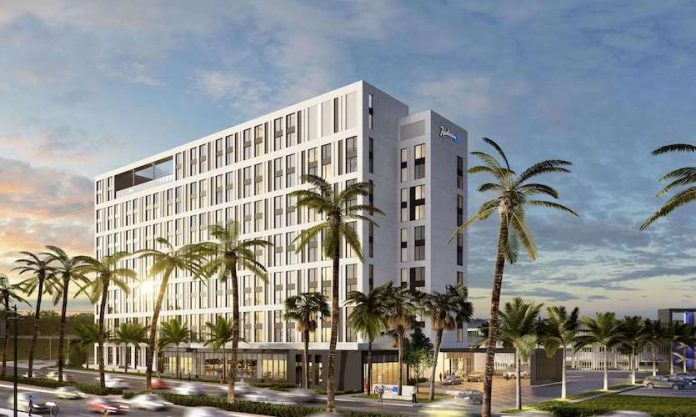 MINNEAPOLIS — Radisson Hotel Group this week announced the opening of Radisson Blu Anaheim—the upper-upscale brand’s fourth location in the United States and first on the West Coast. Four blocks away from Disneyland, the 326-room hotel has three distinct food and beverage offerings, two pools, and a 12th story rooftop. The hotel will welcome guests beginning the week of October 26.

“We are thrilled to continue building momentum for the Radisson Blu brand in the Americas with our first West Coast property in California,” said Aly El-Bassuni, COO, Americas, Radisson Hotel Group. “Located just a short distance from Orange County’s premier attractions, Radisson Blu Anaheim serves as the perfect backdrop for business and leisure travelers looking to have a magical stay. Alongside the ownership team at BPM Real Estate Group, our team has implemented our Radisson Hotels Safety Protocol, a comprehensive program for keeping guests and team members safe while still embracing our ‘Yes I Can!’ service philosophy.”

“It is fantastic to once again partner with Radisson Hotel Group to bring this sophisticated global brand to Southern California,” said Walter C. Bowen, founder and CEO of BPM Real Estate Group. “Our team looks forward to debuting this unique property, along with the brand’s signature mix of personalized services and stylish spaces, to the Anaheim community.”

Radisson Blu Anaheim’s design has subtle nods to surrounding attractions. One example can be found in the lobby’s hand-tufted rug, which is an abstraction of the property’s position at the juncture of I-5 and Anaheim Boulevard.

“The Radisson Blu brand seeks out locations in gateway cities—hubs for travelers from all walks of life—and Anaheim embodies that perfectly,” said Steve Lindburg, general manager of Radisson Blu Anaheim. “From its exceptional design to world-class culinary offerings, Radisson Blu Anaheim combines a signature European aesthetic with the local flavor of its surrounding community, creating a singular sense of place that leads to powerful guest experiences and memories.”

The guestrooms and suites, public areas, and food and beverage spaces were designed by the hospitality interiors team at global design firm HKS, led by Principal and Director of Design Mary Alice Palmer and Senior Interior Designer Vanessa Redman. Contrasts between light and dark are woven throughout the hotel. More than 130 rooms include bunk beds ideal for family stays of up to six guests as well as 40 pairs of connecting rooms and 20 suites with corner views. The bunk bedrooms have a bright color palette while the other rooms have subtler tones found in a Southern California sunset. 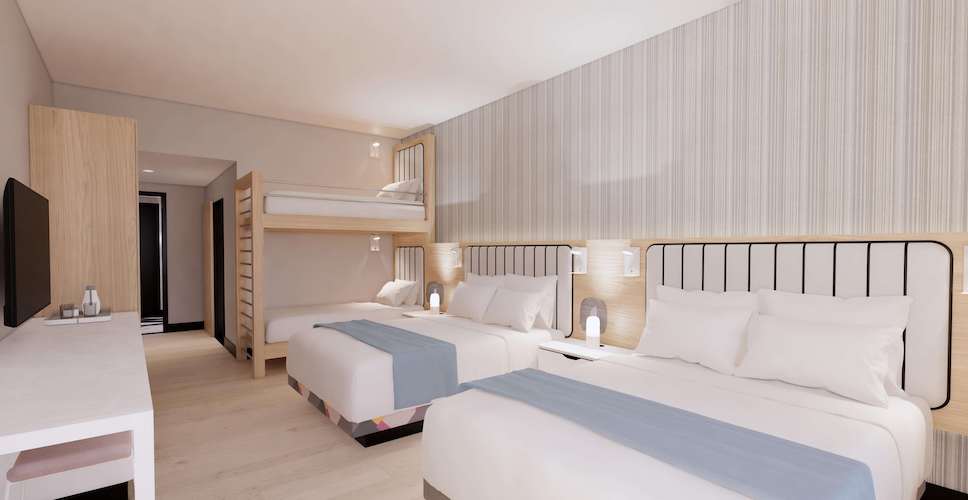 The exterior façade and porte-cochere lead to a light-filled lobby with a round ceiling-hung swing and a large window wall with grand French doors opening to the patio to create an exterior extension of the communal space. The lobby’s focal point is an art commission by California art studio Nikolas Weinstein Studios, which was custom-designed to evoke the visual of individual glass pieces blowing in the Southern California breeze. A large, round art piece, evocative of View-Master slides, offers a glance into the area’s entertainment and sports offerings. Three life-size space soldiers have been painted by a local artist in the iconic Charlie’s Angels pose. 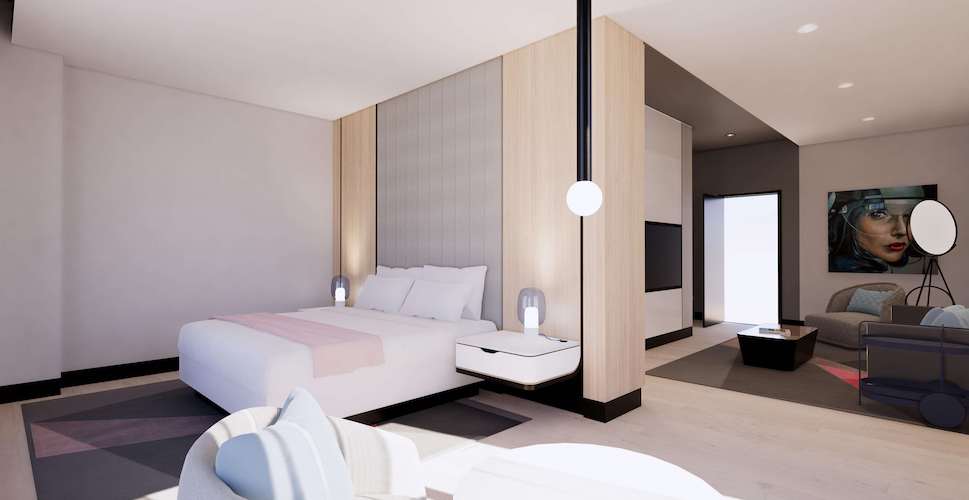 The property has two meeting rooms and 810 square feet of meeting space, which can be booked as conference venues or for breakout sessions after trade shows at the Anaheim Convention Center. The two modern boardrooms can be combined to accommodate up to 70 guests or divided to hold 30 people each. For larger events, FireLake Grillhouse and Cocktail Bar and Blu SkyBar are available for semi-private events and buyouts.

ABOUT US
LODGING is the Official Publication of the American Hotel & Lodging Association (AHLA)
FOLLOW US
© Copyright 2019, Lodging Media, All Rights Reserved.
MORE STORIES
Acquisitions

‘This Is Our Time’: AHLAF Scholarship Recipients Plan for a Future...