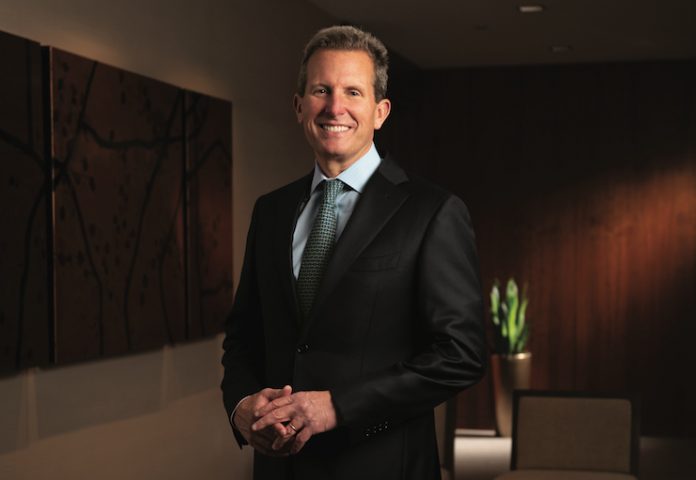 Like so many top executives in the industry, Geoff Ballotti started his hospitality career surrounded by suds—washing dishes in a hotel kitchen. Back then, he says, his aspirations were to move out of the kitchen and into the dining room, busing, then, maybe even waiting tables. It probably goes without saying that Ballotti advanced through the ranks, achieving those goals and more. One constant remained though; he never left the hotel industry.

“In the late 1990s, I took on my first general manager role. At the time, I thought it was one of the best jobs out there, and I have not changed my mind. Having a group of associates that you care about, that you wake up every day and get to lead, was one of the best feelings I’ve ever had,” he says. “So I never left. It’s an industry that’s all about people, and that’s where I want to be.”

Now, Ballotti is the president and CEO of Wyndham Hotels & Resorts and incoming chair of the American Hotel & Lodging Association (AHLA). Ballotti has been heavily involved with AHLA since 2002, when he was working for Starwood Hotels & Resorts. “I was a representative for Starwood on AHLA’s Executive Committee,” he describes. “But I was engaged at all levels, and learned as much as I could from the leadership at the time.”

Around 2008, Ballotti was encouraged by Bob Alter, a lifelong hotelier and founder of Sunstone Hotel Investors, to succeed him as the head of AHLA’s Hotel Political Action Committee (HotelPAC). “That position flipped a switch for me,” says Ballotti. “Being chair of the PAC, reaching out to our industry for donations, and seeing the benefits those donations can have on Capitol Hill for our industry cemented my involvement with AHLA. It’s an incredible association with an incredible group of leaders, officers, and executive committee members. It’s a lot of fun and we do really important work on behalf of our entire industry.”

“I’ve been in the association world a long time, and from my perspective, AHLA is the most dynamic, well-respected trade association today in D.C.”

Ballotti is excited to start his AHLA chairmanship this month. “I’ve been in the association world a long time, and from my perspective, AHLA is the most dynamic, well-respected trade association today in D.C. I don’t think there’s ever been a point in time in this association’s history where the entire leadership of this industry believes that, which they absolutely do now,” he says. 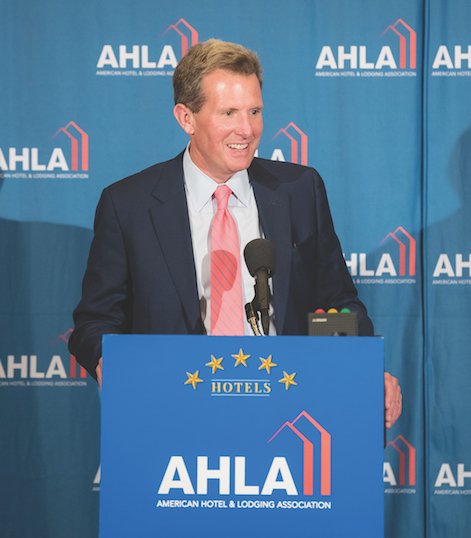 His top priority in 2019 is to focus on issues surrounding labor and the hospitality workforce, which is facing challenges rooted in an industry-wide dearth of qualified talent, both to work in hotels and to build them. “I think it’s the biggest issue facing our industry right now,” he remarks.

Another area of focus for Ballotti will be fighting back against illegal hotels stemming from home-sharing companies like Airbnb, an ongoing battle for AHLA and the hotel industry as a whole. “These illegal hotels have resulted in very unfair playing fields for our industry, while also breaking up the fabric of existing neighborhoods,” he says.

Ballotti also wants to continue AHLA’s aggressive advocacy on behalf of consumers in combating fraudulent booking sites. He explains, “We’ve done great work when it comes to consumer protections, and we want to keep moving in that direction.”

“Our voice in Washington is already strong, but we can make it even stronger.”

Finally, Ballotti is positioning the organization to continue the great work the AHLA has done over the past few years. “I think as we look to the next chapter, I’d like to see us again build on the legacy that Katherine Lugar and her team created and the status that they achieved. Our voice in Washington is already strong, but we can make it even stronger.”

A Powerful Force in Washington

Continuing to build the strength of AHLA is extremely important to Ballotti, as he believes AHLA is the perfect organization to represent the diversity of the hotel industry. “AHLA represents everyone, from big brands like Wyndham, Marriott, and Hilton, to independent properties and owners, to real estate investment trusts and management companies. Even though some of us are competitors, we’re all on the same team and it is absolutely critical to have a united voice.”

He adds, “I sincerely believe all of the officers, and, for that matter, all of the people who give their time to AHLA, are drawn to the idea of helping the industry as a whole.”

There is also a lot going on in Washington, and the strength of AHLA is allowing the organization to influence policy in a way that it has never been able to before. “There are incredibly important policy debates playing out today in Washington. It’s critical for hotel leadership teams to be at the table when these policy discussions are happening, whether those conversations are about jobs, about worker and guest safety, or most importantly, what’s going on right now in workforce development,” Ballotti describes. “In fact, the moves AHLA makes in these areas allows us to weigh in with real-world experience when policies are being discussed.” Ballotti specifically mentions the organization’s recent “5-Star Promise,” a pledge from AHLA and industry leaders to provide hotel employees across the United States with employee safety devices and a commitment to policies, training, and resources aimed at enhancing hotel safety, including preventing and responding to sexual harassment and assault.

“We really are one of the few industries that can say we have a presence and an impact in every single congressional district in this country. That footprint makes a tremendous difference on Capitol Hill.”

Furthermore, the wide breadth of the hotel industry uniquely positions hoteliers to weigh in on matters of policy. Ballotti explains, “We really are one of the few industries that can say we have a presence and an impact in every single congressional district in this country. That footprint makes a tremendous difference on Capitol Hill. We’re in rural and urban areas. Our ranks include both Democrats and Republicans. We’re everywhere and everyone. We are a major employer in every community across this country. Lawmakers want to hear our stories, they want to hear what we have to say, and that’s an excellent position to be in.”

Moving forward, Ballotti is extremely optimistic about AHLA and what the organization can accomplish. “Our leadership team is incredibly talented, and the depth and breadth of our capabilities are as strong as ever.” He mentions the departure of AHLA CEO Katherine Lugar, who left at the end of last year, saying that the organization is sad to see her go, but that she left AHLA in an excellent position for continued growth.

In December, AHLA announced that the Asian American Hotel Owners Association (AAHOA) CEO Chip Rogers will succeed Lugar as the next president and CEO of AHLA.

“Our incredible team of leaders—which includes Chip, Rosanna Maietta, Brian Crawford, and Shelly Weir—is doing amazing work on behalf of this industry, growing our investment in our workforce with programs meant to develop and promote the best and the brightest to lead the future of our industry. Our industry is all about people, and we are doing all we can to make sure they have every opportunity to succeed,” Ballotti says.