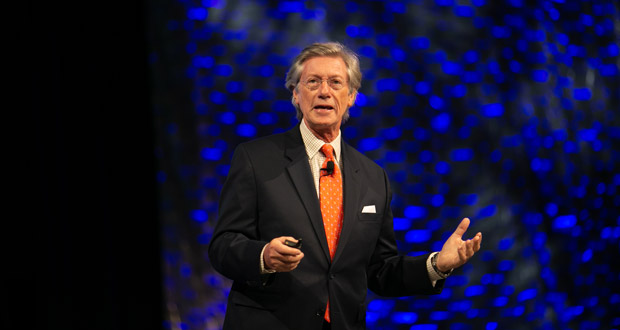 More than 600 revenue managers and hospitality professionals gathered in Houston last month for the Hospitality Sales and Marketing Association International’s (HSMAI) Revenue Optimization Conference (ROC). During the conference, The Economic Outlook Group’s Chief Global Economist Bernard Baumohl outlined what revenue managers can expect in the year ahead and how they should prepare for situations in which the United States experiences an economic slowdown.

The industry entered 2016 with a great deal of optimism and momentum and that continued as the U.S. economy experienced 3 percent growth for most of 2017, Baumohl explained. On top of that, tax reform and high consumer confidence fueled projections of growth. However, Baumohl said that the environment has changed in the last six months. With household and government debt at record levels, the Federal Reserve raising interest rates, smaller-than-expected rebound on personal and corporate spending from tax reform, and greater international tensions have created an environment of lowered expectations for economic performance in the years ahead, Baumohl explained.

“You can expect the economy to still show considerably strong signs this year,” Baumohl said, adding that second-quarter growth in the United States is expected to be greater than 4 percent and other economic indicators will likely point to economic strength as well. “The concern that I have is that we’re beginning to see the seeds of a much more significant slowdown that’s going to take place in 2019 and especially in 2020. If there was a time that revenue managers start preparing for an economic slowdown, this is the year to really consider some strategies because we do believe that the prospect for a significant slowdown and possibly even a recession is likely over the course of the next three years.”

“From a broader perspective, it looks like this industry is facing a triple blow over the course of the next two to three years,” Baumohl explained. “One is that labor costs are going to climb because the pool of labor is shrinking.” Secondly, Baumohl said that trade disputes are expected to slow incoming business travel to the United States as well as slowing inbound leisure travel.

In terms of how revenue managers should use this information to prepare for the years ahead, Baumohl said that managers must position their properties for a possible economic slowdown. Below are three of Baumohl’s recommendations.

“Right now is when one has to prepare strategies to make sure that you’ve got a positive cash flow operation going on when the economy slows and when the demand for hotels starts to wane.”

Baumohl also recommended that hoteliers and revenue managers take this opportunity to focus on maximizing and utilizing traveler data collection to find patterns on their spending behavior and preferences and use social media to better market to them. “Show them that this is where our brand is unique and we can even be price flexible,” he explained. “You get no revenue from an empty room. I think it’s important, as the economy starts to weaken, to introduce the concept of price flexibility as the economy starts to slow.”

“It is also important to be focused on improving efficiencies in how hotels operate and improve productivity,” he added.

“Focus on undertaking rigorous stress tests,” Baumohl advised. “Come up with adverse hypothetical scenarios—scenarios that could really do damage to the operations of a hotel. What if it disrupts your business activity? What if somehow your whole internet or intranet system completely collapses—not just for an hour or two, but for days? What if you don’t have access to credit cards? What happens in those circumstances, how do you cope, and how do you remain profitable in those types of situations? These are scenarios that really need to be looked at seriously in preparation for the future.”

“Business leaders need to assign a team of experts to look at what the geopolitical threat probabilities are, particularly in those countries and regions of the world where they have assets—hotels, bank accounts, supply chain linkages,” Baumohl said. “What is going to be the geopolitical shock, how is it going to evolve, and what implications will it have for the businesses?”

Have a Plan in Place

“One has to really get out in front and be proactive by having a contingency plan put in place so that when the time comes—whether the economy starts to slow or there is a geopolitical shock—at least you already have a well-prepared plan to put in place that would help mitigate the risks,” Baumohl concluded.

21 Out of 25 Top U.S. Markets Remain in Depression or Recession

Red Roof Franchisee Nancy Patel on Her Way to Success