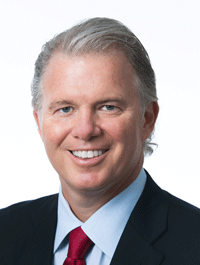 Mike Muir grew up spending his summers at the Jersey Shore, where he watched as his father managed the pool and beach at an Atlantic City hotel. Early exposure to the industry led to Muir catching the hospitality bug. When it was time to decide where to attend college, applying to and subsequently enrolling at the University of Las Vegas to study hospitality was one of the easiest decisions he ever made. Since graduation, Muir’s career has been marked by success. He helped launch and develop Microtel Inn & Suites and Hawthorn Suites, he has worked for Holiday Inn Worldwide and the Wyndham Hotel Group, and most recently, he served as the vice president of North American development for Best Western. About a year and a half ago, Muir’s career went in an interesting direction, and prior to his passing on March 10, 2017 at the age of 50, he served as EVP and general manager of the hotels team at Live Oak Bank. Muir spoke to LODGING about his move to the lending side of the hotel business and what development trends hotels will see in 2017.

What made you pivot into the lending arena? Even though I only joined Live Oak Bank a year and a half ago, I’ve been doing hotel development since 1988. That’s all I’ve really done in my hotel career—help people go into business for themselves, but not by themselves. The main reason I decided to pivot into the lending side of the business was a friend, Neil Underwood, the president and director of Live Oak Bank, came to me and said that they wanted to start a hotel division. Live Oak Bank is the second largest SBA lender in the country, and a domain expert runs each of their divisions. I was able to bring my hotel development expertise to the table while being surrounded by professional loan officers, underwriters, and other financial experts. My job is to work with these men and women to ensure we’re working with the right people, in the right markets, and developing the right brands.

Do you keep any particular factors in mind when considering loan applications? We don’t bet on the horse, we bet on the jockey. The jockey is the one who runs the race, and in our world, the jockey the owner and the operator of the hotel. I’ve been in this business for so long and have had a lot of exposure to different owners and developers. It’s just something I have a feeling for at this point in my career.

What are you predicting in the hotel development space in 2017? Right now there are a lot of lenders out there, but some of those lenders are pulling back and becoming a little more conservative with their funds. These are lenders who only want to finance development for existing hotels that already have cash flow and are showing good numbers.

That’s not what we see for Live Oak Bank. We’re taking the riskier bet and committing ourselves to new construction. We don’t base these decisions on revenues either; we’re going off of feasibility studies and high performers who have already seen success as a hotel operator. Overall, I’m expecting a very healthy 2017. And not only do I expect that for us, but I also think that a rising tide lifts all boats. Everybody right now is enjoying success in the hospitality business.

Do you have any advice you would give a hotel developer today? If you can get the money, build it. It’s still a great time to be in the hospitality business and it’s a great time to be able to build a hotel. In fact, it’s almost at the point where it is cheaper to build than it is to buy and renovate—and if you build, your end product is a brand new hotel. A first time operator who has never built a hotel may have more challenges than someone who has been there and done it before, but there are opportunities out there for those who look.

Hotel Industry to Spotlight Employee Superstars at its Annual Fundraiser

Checking in With Arzu Molubhoy of Atlantic Hotels Group

How Hilton CEO Chris Nassetta Is Celebrating Its 100th Anniversary