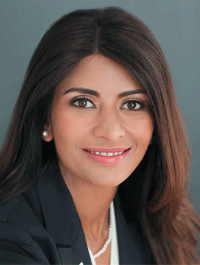 Jagruti Panwala is a busy woman. Her family owns and manages four hotels, the first of which Panwala bought with her father and uncle when she was only 19 years old. She is the owner and president of Wealth Protection Strategies, an asset protection company. And, adding to her responsibilities, earlier this year Panwala was elected secretary of the Asian American Hotel Owners Association (AAHOA), the first woman to ever reach such a position in the organization’s 27 years of existence. She will climb the ranks at AAHOA, and in 2019, she will also become the organization’s first female chair. Panwala is raring to go, and already has several initiatives for AAHOA in mind.

How did you first get involved with AAHOA?
Honestly, if you’re in the hospitality industry, how can you not be involved with AAHOA? AAHOA members own one out of every two hotels in the United States. I’ve been a member for over a decade, but first became a board member in 2011. I ran for female director at large, Eastern Division, which focuses mostly on increasing women’s involvement in the association. It was a three-year term, and when it was up for re-election in 2014, I won again. So by the end of my term as chair, I’ll have been a board member for 10 years.

What was it like to learn you were going to be AAHOA’s first female officer?
AAHOA has been around for 27 years. So when I won, I felt that it was time. The participation of women has been increasing in AAHOA, but rarely, if ever, in leadership roles. Never for chair. It always seemed like a tough road—and it is a tough road—but I think we needed to break the barriers. The membership was excited and ready. I was elected via general election, which encompassed over 1,200 voters. When I received a majority vote, I knew that membership was ready for a female leader. I’m honored that they put that trust and faith in me.

What’s changed since you’ve become an officer?
My perspective. When you’re a member, you’re looking at everything on a very basic side. These are my needs as a member, and these are the things that I want AAHOA to be doing. When you are an officer, you are looking at everything from the perspective of the whole association. Now, I’m thinking about how we as an organization keep progressing and how we can protect our association from things that will cause it harm.

What initiatives do you have planned for AAHOA?
When I ran my elections, there were a few initiatives on my platform. The first was education. I’ve always thought that whatever you do in life, if you’re educated, you’ll be better at it. We have to come up with new and advanced educational programs for our members. We’re currently developing brand workshops, like how to structure a new hotel. We’re also working with brands like Hyatt, Hilton, and Choice to do a one-day workshop for young professionals and women hoteliers.

This isn’t my personal initiative, but it’s one that we’re doing as board members and officers. Women and young professionals are the backbone of this industry. We rolled out this initiative this year. There’s also legislation. We’re really focusing a lot on state and local laws. We have always been very passionate about the federal side, but now we’re hiring more people to make sure that we are focusing on the state and local side regarding any laws that could affect the hospitality industry.

How do you get it all done? Do you ever sleep?
I sleep, but every day I wake up and I determine the 10 things I need to get done. Then I prioritize them and get them done. Sometimes things change, and I have to change with them, but I also am able to set clear boundaries for my time. When I’m with my family, I’m with my family, and I make a conscious effort not to let my work seep in. It all works out because I love what I do. I love AAHOA. I love my hotels. I love my asset protection business. If you love what you do, you can manage it.