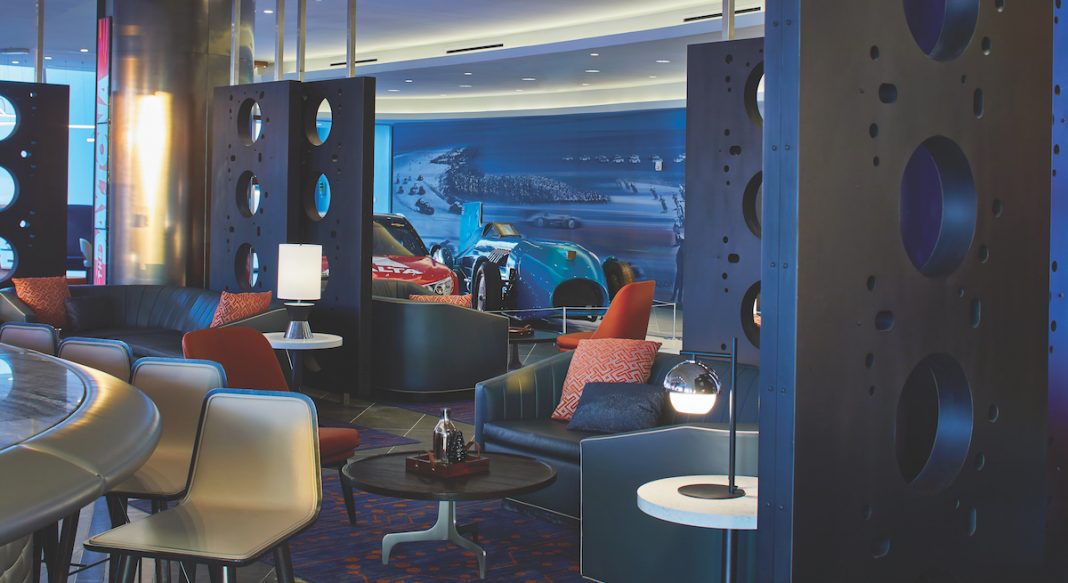 Steps away from the Daytona International Speedway sits The DAYTONA, an Autograph Collection hotel inspired by the city’s motorsports history. Boasting a rotating wheel based on a 1978 Pontiac Trans Am, the second-floor lobby—called “The Grid”—welcomes motorsports lovers as they check-in and showcases racing cars year-round. Car exhibitions in the lobby include a modern interpretation of one of racing history’s greats, Sir Malcom’s famed Blue Bird, an all-time Daytona lap breaker Ford EcoBoost, and one of Harley Davidson’s 50th Bike Week commemorative motorcycles.

Off the lobby, an outdoor terrace provides views of Victory Circle, a live entertainment space showing synchronized fountain performances and concerts. The 144 guestrooms were also designed with the speedway in mind, with muted color palettes and circular motifs. The property has a pool equipped with rentable cabanas, a fitness center, and over 10,000 square feet of meeting and event space.

Onsite restaurant Sir Malcom offers upscale American fare, and the Blue Flame bar reflects Prohibition’s influence on racing. Blue Flame has a partnership with Sugarland’s Shine, the official moonshine of NASCAR. The bar even has a signature moonshine lighting ritual, which pays homage to the Prohibition-era practice of lighting moonshine on fire to determine whether it was drinkable. “This would determine its purity—a yellow flame meant it was bad to drink, while a blue flame meant it was good,” says Keith Thompson, director of marketing for Prime Group, which is a part-owner of the hotel. “This is the inspiration behind the bar’s name, Blue Flame.” 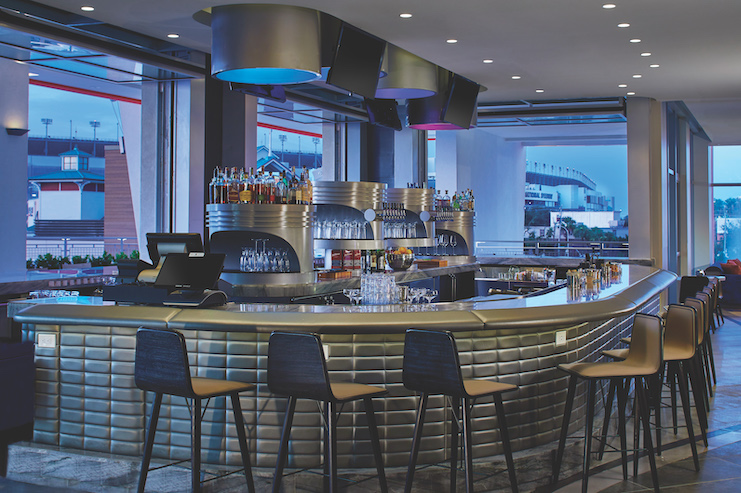 “All of the materials and shapes, as well as many actual items within The DAYTONA, reflect the parts, metals, glass, leathers, and woods used in racing machines,” Thompson says. The bar materials are modeled after parts of racing cars, and the entire back of the bar, including the beer taps, is modeled after engine pistons.”

Behind the seating area, Blue Flame has racing cars on display for guest viewing. “The red car is the Brumos Racing 1970 Porsche, which was used to capture the first IMSA GT championship title. The car to the right is Sir Malcom’s Blue Bird race car, which set five land speed records on the sands of Daytona Beach,” Thompson says.

Thompson adds that each piece of artwork was curated specifically for The DAYTONA. He says, “The mural behind the cars is Motor Beach, by Keith A. Thompson, a compilation of historic photographs from the archives of the International Speedway Corporation, arranged to tell the story of the history of racing in Daytona Beach.”

HRI Properties to Open The Industrialist Hotel in Pittsburgh

The Cloudveil to Open in Jackson, Wyoming, in Spring 2021

Check Out: The Lounge at The Edgartown Inn in Martha’s Vineyard

Check Out: The Living Room at The Drayton Hotel

Comings & Goings LODGING Staff - January 21, 2021
Raul Leal is stepping down as chief executive from Virgin Hotels. Leal has been significant to the company over his 10-year tenure. He was...

ABOUT US
LODGING is the Official Publication of the American Hotel & Lodging Association (AHLA)
FOLLOW US
© Copyright 2020, Lodging Media, All Rights Reserved.
MORE STORIES
Comings & Goings