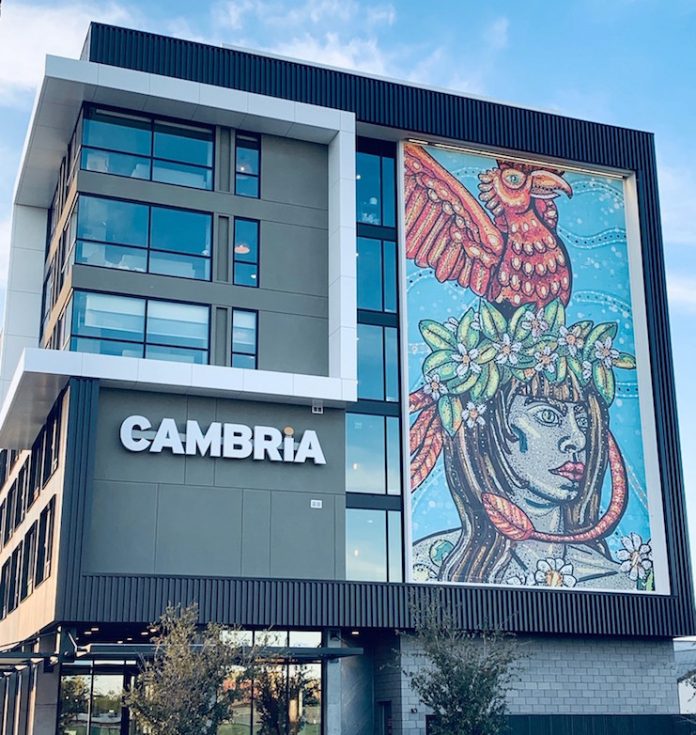 “Phoenix is the fastest-growing of America’s five largest cities, making it another ideal location for Cambria as the brand approaches the end of another defining year,” said Janis Cannon, senior vice president, upscale brands, Choice Hotels. “Conveniently located in the lively Roosevelt Row Arts District, guests are equally close to the city’s corporate epicenter and thriving arts scene. The Cambria Hotel Downtown Phoenix captures the area’s creative, innovation-driven culture and is sure to provide experience-hungry travelers with the unique atmosphere and little luxuries they seek.”

The Cambria Hotel Downtown Phoenix Convention Center has a rooftop with event space, a pool with cabanas and bar, and views of the surrounding city. The property also has an onsite restaurant called Poppy, a fitness center, and multi-function meeting and event space.

The hotel is managed by Oxford Hotels & Resorts, LCC, a lifestyle-oriented hotel management company, and was developed by True North Studio, LLC, a local firm with multiple projects nearby that will enhance the Roosevelt Row Arts District and downtown Phoenix.

There are 49 Cambria hotels open across the U.S. in cities like Chicago; Dallas; Los Angeles; Nashville, Tennessee; New York; Phoenix; and Washington, D.C. The brand is on pace for a record-breaking openings year in 2019 with properties in top-tier markets, including soon-to-open properties in Anaheim, Calif., and Bloomington, Minn. The new Phoenix hotel is the latest in a long line of Cambria hotel openings this year across the country, in which 10 hotels have opened their doors, together representing over 1,600 upscale rooms.

AHLA Announces 2020 Officers, Board, and Executive Committee Amid Record Membership

Not Her Mother’s Daughter: Rita Santillanes on Building a Family Business...