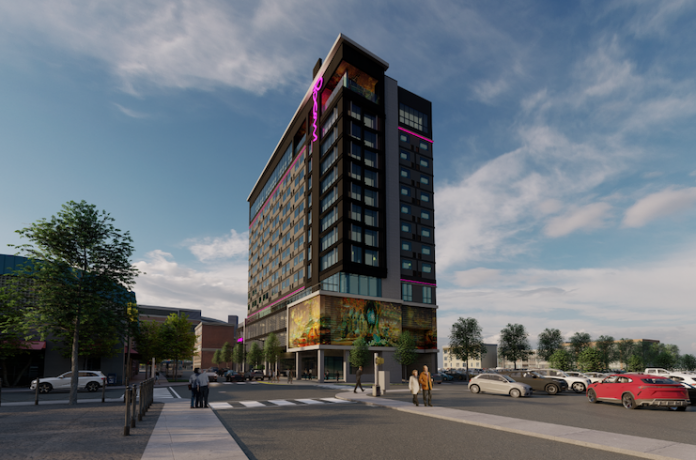 CHARLOTTE, North Carolina—Canyon Partners Real Estate LLC announced it has provided a $51.5 million senior loan to TMGOC Ventures, a partnership between Opterra Capital and The Montford Group, for the construction of a 13-story, 208-room Moxy Hotel located in Charlotte, North Carolina. The Moxy Charlotte is scheduled to open in September 2024. The Moxy Charlotte represents Canyon’s second transaction with TMGOC Ventures and its third Moxy Hotel financing.

Located in uptown Charlotte, one block from two mass transit systems, Moxy Charlotte will sit near the city’s business, sports, and entertainment venues. As a hub with a growing technology workforce, the city is home to the corporate headquarters of nine Fortune 500 and 18 Fortune 1000 companies, as well as main offices for three of the nation’s largest banks.

“Uptown Charlotte continues to benefit from a strong business environment, with several corporate expansions and relocations bringing traveling professionals to the city. This level of positive activity lays the path for long-term demand for centrally located hospitality assets,” said Sunju Patel of The Montford Group. “We are pleased to work with Canyon and Opterra again to provide a strong offering for professionals both visiting and living in Charlotte.”

“With over two million square feet of office space under construction or recently delivered in Uptown Charlotte and employees at major companies in the region returning to in-person work, Moxy Charlotte is perfectly placed to accommodate the upcoming influx of activity,” said Glenn Alba of Opterra Capital. “This project is well-timed in such a dynamic and flourishing city. We are thrilled to work alongside Canyon and TMG once again on this project.”

Amenities offered at Moxy Charlotte will include a rooftop terrace, a Starbucks coffee shop, and a bar on the top floor. Moxy Charlotte will also be an option for visiting sports fans, given its proximity to the Bank of America stadium, which is home to North Carolina’s professional football and soccer teams, as well as the Spectrum Center, which houses the city’s professional basketball team.

Moxy Hotels are affiliated with Marriott International and Moxy Charlotte will benefit from Marriott’s reservation system and guest loyalty program, Bonvoy, with over 160 million rewards members. The hotel will be managed by Aimbridge Hospitality.