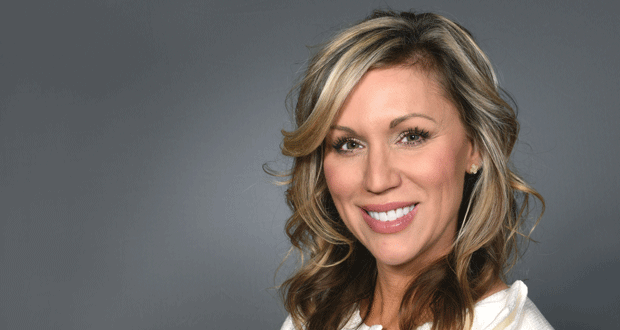 When Andrea Foster joined her father on a business trip as a teenager, she had no idea it would change the course of her life. She remembers sitting in on a meeting between her real estate developer father and a woman who led a region of hospitality properties. Foster hung on to the woman’s every word. “I remember thinking she was smart, direct, and accomplished,” Foster says. “Seeing a woman in an industry leadership role inspired me to essentially want to be her.”

After sharing this revelation with her father, Foster had the chance to speak with the woman, who then extended her an internship opportunity with Marriott Ownership Resorts International (now Marriott Vacation Club) on Hilton Head, S.C. The summer before starting her freshman year at Cornell’s School of Hotel Administration, Foster rotated through the front desk, housekeeping, engineering, sales and marketing departments. “In addition to getting a great introduction to hospitality, it also opened my eyes and expanded my perspective to a richer diversity than I had experienced growing up in a smaller town in Maine,” she says. (She would love to thank this woman for making such a huge impact on her career, but Foster has been unable to track her down.)

After graduating from Cornell, Foster went into operations, holding various managerial roles in branded and independent properties on the East and West coasts. “I felt it was important to start my career in operations, because it would be valuable for me to understand the industry from the inside out,” Foster explains. She went on to work with PKF Consulting (now CBRE Hotels), where she was responsible for hospitality real estate ventures and feasibility analysis, and later served as vice president of marketing and business development for Miraval Holdings, a destination spa resort and healthy lifestyle brand. She returned to PKF in 2011 as a managing director, leading PKF’s New England practice based in Boston, as well as overseeing its national spa advisory practice. Foster’s vast hospitality experience has been exceptionally valuable in her current role as senior vice president of development at Milwaukee-based Marcus Hotels & Resorts, which manages and/or owns 18 hotels and resorts across the country. A personal model she follows is to never take a job she’s already done. “It’s important to always push yourself to grow and expand. I always want to be comfortable being uncomfortable—that’s where the growth happens.”

Foster cites a statistic from a Hewlett Packard report that showed men apply for a job when they meet only 60 percent of the qualifications, while women apply only if they meet 100 percent of them. A job description is more of an ideal wish list, Foster points out, so candidates shouldn’t feel pressured to tick off every single box.

“You can always take skill sets and apply them in new ways—they are transferrable skills,” she advises. “Anything that hasn’t been specifically done before are things you learn and grow into.”

Marcus Hotels & Resorts, a division of the Marcus Corporation, currently has the most female leaders on its executive team in company history: two-thirds of the SVPs who report directly to COO Joe Khairallah are women, and 44 percent of the senior leadership team are women. “We source talent based on finding the best person for the role,” Foster says. It just so happens that the last few additions to the leadership team have been women. In addition to Foster, who joined the company in December 2015, these include Susan Terry, vice president of culinary and food and beverage operations; Peggy Williams-Smith, promoted to senior vice president of SafeHouse Restaurants; Laurie Hobbs, vice president of marketing; and Linda Gulrajani, vice president of revenue strategy and distribution. “When we have our team meetings, having that balance of the male and female perspective offers such a deep level of care, concern, and introspection of various initiatives and issues we work with every day,” Foster says.

The team celebrates the idea of “oneness,” in that the entire group shares the same goals and wants to contribute positively to a greater purpose, she adds. “We recognize and respect that in one another, which leads to a strong and unified strong team, and ultimately results in exceptional performance for our partners and our clients.” Over the last eight years, Marcus Hotels & Resorts’ portfolio of properties has averaged 135 percent above RevPAR market index. Recent success stories include the execution of a multimillion-dollar room transformation of its former Four Points by Sheraton Hotel in Chicago, which rebranded and reopened in as the fourth AC by Marriott hotel in the country. Since the conversion, the hotel has outperformed its comp set in RevPAR increases, in a market with significant new supply, and has shown solid increases in gross operating profit. Marcus also planned and executed an approximately $40,000-per-key renovation of the Westin Atlanta Perimeter North, which has posted a 45 percent increase in RevPAR and a 107 percent increase in gross operating profit since the project completed in 2012.

Foster believes the hospitality industry is moving in the right direction when it comes to recruiting, retaining, and advancing female leaders, “but it’s important that we don’t take our foot off the gas.” She notes Katherine Lugar’s leadership at the American Hotel & Lodging Association as having a positive effect on the views of male hospitality executives for greater gender diversity at the top. To ensure female students have an even playing field in the industry, Foster is working with Dr. Arun Upneja, dean of Boston University’s School of Hospitality Administration, to create a program that would help female students develop networking skills, confidence, and assertiveness, and ultimately give them greater opportunities in their careers. The targeted launch for the program is spring 2017.

Foster always makes a conscious effort to be a positive role model for others, because she never knows who may be watching, listening, and learning. Had Foster’s 14-year-old self not met the woman at her father’s business meeting, she might not be where she sits today. “We are all role models to others. No matter who we are, there is always someone or many someones who look to us and model their behaviors after us,” Foster says. “Each one of us has the ability to truly shape our industry.”