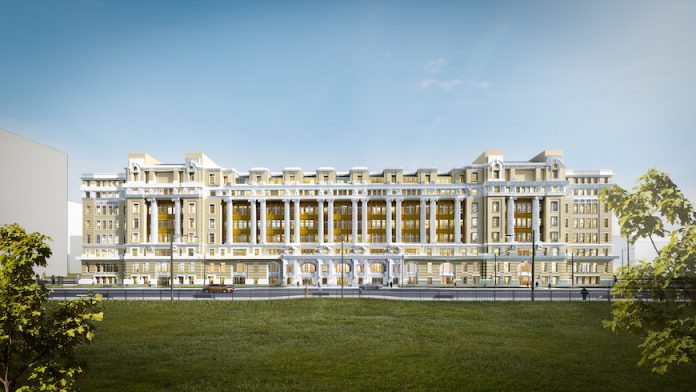 CHICAGO — Hyatt Place and Hyatt House Chicago Medical/University District, the first combined Hyatt Place and Hyatt House hotels located in Chicago, is set to open this summer in the 106-year-old Cook County Hospital at 1835 W. Harrison St. on the Near West Side. The 342,000-square-foot adaptive reuse project is part of a $150 million multiphase plan spearheaded by Murphy Development and SOM in a design-build collaboration with Walsh Construction, Wiss, Janney, Elstner Associates, Inc., and KOO. The property will include 4,000 square feet of meeting space, open-concept public spaces, a 24-hour fitness center, a food hall, medical offices, and a museum paying tribute to the hospital’s legacy. Upon opening, the hotels will be operated by Aimbridge Hospitality.

The Cook County Hospital suffered both exterior and interior deterioration due to deferred maintenance and exposure to the elements once it closed down. Designed by Paul Gerhardt, the building has Ionic columns and faces of lions and cherubs throughout. The project will restore and preserve the historical pieces of Cook County Hospital, including the original Beaux-Arts masonry detailing and terracotta ornamentation of the exterior, the wood-framed windows, interior decorative plasterwork, the double-height main lobby, and 106-year-old restored marble stone staircase, elevator cores, as well as the double-loaded corridor and terrazzo flooring of the interior. The team also spent more than $18 million to replace all windows and 4,160 terra cotta pieces on the exterior, made of granite, brick, and limestone.

The interior of the building was completely gutted except for the surgical theaters on the eighth floor, which were first used by Rush Medical School when the hospital opened in 1857. Replaced by Stroger Hospital of Cook County, the space was later preserved as an architecturally significant landmark, often referred to as Chicago’s “Ellis Island”—a safe haven where anyone was able to receive service and care. The hospital-turned-hotel is now both an official Chicago landmark and is listed on the National Register of Historic Places. It is also known for hosting the world’s first blood bank, and inspiration for the medical TV drama “ER.” The new adaptive reuse design will include a new façade for a portion of the southern face of the hospital, previously connected to the demolished projecting wings and additions of the building. A museum gallery will also be built on site to pay homage to the history of the building.

This project is part of the Cook County Hospital’s transformative $150 million renovation led by Murphy Development and Walsh Group. The multiphase project will also include the opening of Dr. Murphy’s Food Hall, a 10,000-square-foot dining destination led by Hospitality HQ and Akhtar Nawab, the chef, restaurateur, TV personality, and food hall veteran, along with medical offices, a daycare center, and a museum paying tribute to the hospital’s legacy.