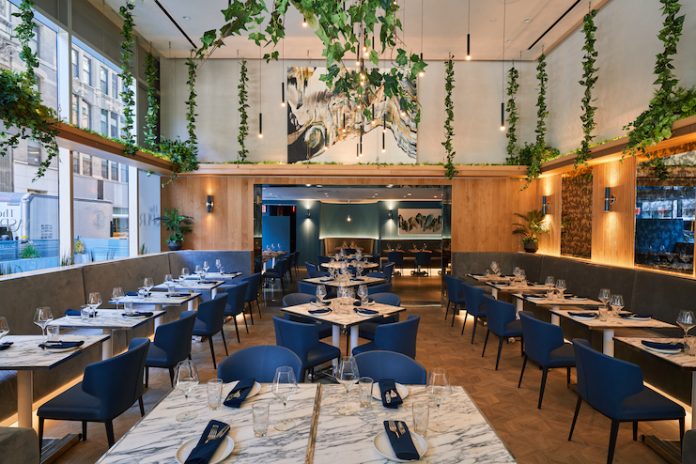 NEW YORK—On the ground level of the Park Avenue Mondrian in New York City’s NoMad neighborhood, The Vasper is a new bistro created with partners at Helios Hospitality. Inspired by the mid-twentieth century modern design movement, the restaurant pays homage to an era of dining and deals made over lunchtime cocktails. Executive Chef Nick Koustefanou has been tapped for food and Beverage Director Evan Hawkins for drink.

Open for lunch, dinner, and private dining experiences, the 120-seat restaurant aims to be for both evening patrons and the office lunch crowd, offering a prix fixe two martini lunch.

“The Vasper is a reflection of both New York’s culinary heyday and the continued innovation we see in modern restaurants,” said Paul Seres of Helios Hospitality. “With the return of office culture, happy hours, and business dinners, The Mondrian struck us as the ideal location for honoring the culinary and cocktail culture made famous in postwar America.”

Koustefanou’s menu highlights the flavors from the 1950s and 1960s updated for today’s palette, with dishes including Hiramasa Crudo with melon gazpacho, radish, chili, and honeydew; Beef Tartare with deviled egg mousse; and toasted sourdough and a Lobster Thermidor for two. The space also has a chef’s counter for tastings, inspired by Koustefanou’s background in Japanese omakase with his experience at Kissaki. The Vasper serves as Koustefanou’s second position as executive chef.

“Though classically American, the modernization of the notably mid-century dishes is executed in a more eclectic interpretation,” says Koustefanou. “Our tasting counter affords us the opportunity to create unique menus for private clients and events.”

The cocktail menu by Hawkins has modern classics. In addition to Hawkins’ take on the gin martini, called “The Vasper” with spiced olive brine, Txakolina Vermouth, and House Giardiniera, The Vasper’s cocktail menu includes the Bitter Rum Mojito, with mint bitter caramel, vanilla, and fresh citrus, and The Mezcal Paloma Whip with dry grapefruit soda and chile salt.

From the bar to the dining rooms, the three spaces of The Vasper, designed by Delphine Mauroit of DMDesign and Tom Mckay of Mckay Architecture, have their own personality while flowing together. As guests move to the dining spaces, they will find fabrics from Kravet and booths. The art collection has works by French artist Silvere Jarrosson and painter Yaacov Agam.