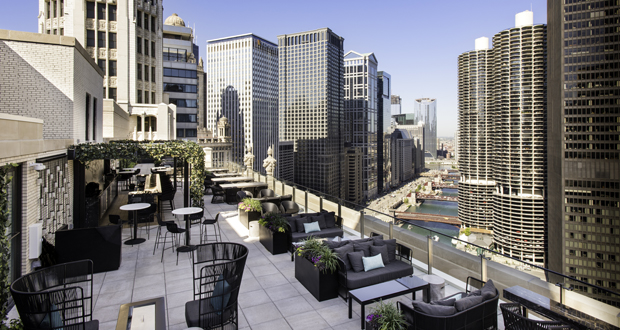 When Oxford Capital Group acquired Chicago’s 360 North Michigan Avenue property in 2013, the company saw a 90-year-old building just waiting to be restored to its former glory. The property, known as the London Guarantee & Accident Building when it was first built on the site of Fort Dearborn in 1923, sits on one of the main four buildings surrounding the Michigan Avenue Bridge. But over the years, it had fallen into disrepair.

“I describe it as a Grace Kelly building,” says John Rutledge, founder, president, and CEO of Oxford Capital Group. “It had beautiful bones. It was a grand dame of a building, but it had become very tired and it was falling apart. And yet, it was in a prominent location. Oxford likes large, complex projects, and this certainly was that.”

After the acquisition, Oxford embarked on what would become a three-year redevelopment process to make way for LondonHouse Chicago, a 452-room hotel featuring a new, adjoining tower built on what use to be a parking lot, as well as a tri-level rooftop bar.

Restoring a nearly century-old building came with its challenges, of course, particularly given that the property, under a 25-year, $315 million lease with Germany’s Union Investment Real Estate GmbH, is a local and national landmark.

“It’s a little bit like the Flatiron Building in New York—people know it. And if you look at pictures of Chicago throughout history, you’d be amazed at how often this building can be seen in the backdrop,” says Rutledge.

That is why it was a high priority to restore and honor the history of LondonHouse—a name referencing a jazz club of the same name that used to occupy its first floor—wherever possible. Oxford restored the building’s façade with its original Indiana limestone, which had been eroded by weather over the years.

When it came to erecting the new, attached tower as part of the hotel, it was crucial that the original and new interior matched for a seamless guest experience. However, Oxford purposefully gave the tower a modern, glass exterior to distinguish it from the original façade.

“It’s interesting—the local, state, and national landmark societies didn’t want us to try to create a faux addition that looked like the original building. They actually preferred that we juxtapose the classical architecture with something different,” explains Rutledge. “It’s like the Louvre in Paris; there is a glass pyramid juxtaposed against the classical architecture of the museum.” 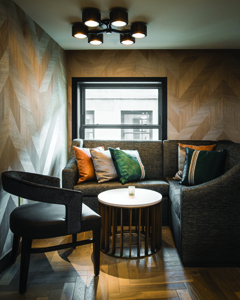 Another challenge Oxford faced was the creation of LH, LondonHouse Chicago’s tri-level rooftop common space that includes an inside bar on the 21st floor, particularly popular during cold Chicago winters, a rooftop bar on the 22nd floor, and a cupola on the 23rd floor.

“We thought that the roof was just full of junk—it was a beat up, old roof. But we were sitting there looking down the river on Michigan Avenue and Wacker Drive, floating among these great architectural treasures. When you look across from the roof, you see the Wrigley Building and the top of the Tribune Tower. We said, ‘Wow. This could be magic.’”

Before the magic could happen, Oxford had to be sure its new plans for the roof did not obscure the city skyline. Oxford was keen to optimize the entire rooftop area for food and beverage, particularly given its unique luxury-lifestyle positioning—not quite super luxury, but more than a lifestyle hotel, according to Rutledge.

“Everyone was really excited about what we had planned there, but also wanted to make sure that the sightlines from across the river and across Michigan Avenue didn’t change dramatically,” says Rutledge. “There was a lot of focus on the different angles from which people would view the rooftop, and not fundamentally compromising that.”

For this reason, the rooftop is set back slightly from its glass perimeter to keep it as untouched as possible. The cupola, located at the very top of the building, serves as a distinctive feature of LondonHouse Chicago that, after being restored, is now used as one of its many private event spaces—good for engagements and small dinner parties. “It was an organic process that started with a vision, and I loved the idea of creating magic up there, too,” says Rutledge.

The renovations continue—a section of the first two floors of the building are carved out for retail space on Michigan Avenue, which is undergoing a revamp in itself, including the expanded River Walk area and a new Apple store.

“There is a lot of new energy,” says Rutledge. But even with changes abounding, he notes that LondonHouse Chicago proudly maintains a piece of the city’s history.

“It was a collaborative approach to redeveloping the property. I think the various landmark societies appreciated that, and we ultimately achieved our collective goal.”