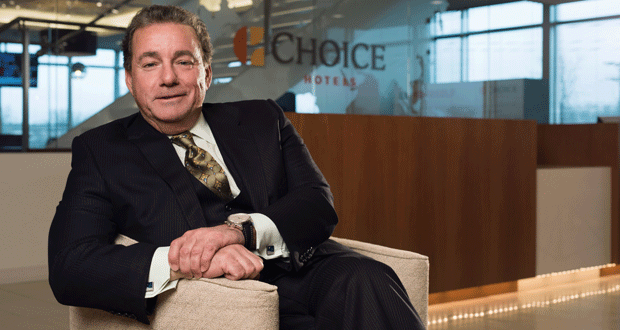 In 2008, Steve Joyce took the helm of Choice Hotels with a mandate for change. “The company had been on a really strong unit growth strategy, at somewhat the expense of the brands,” Joyce recalls from his office at Choice’s global headquarters in Rockville, Md. With the endorsement of the board of directors, Joyce put together a three-page plan and showed it to the senior team. They revolted. “A lot of that team is no longer here,” Joyce says, unapologetically. “I didn’t come in to run the business, I came in to change it.”

What Joyce didn’t anticipate was a major recession that would put his leadership abilities to the ultimate test. At first, the environment looked promising. In September 2008, he had just made a deal with Och-Ziff Capital Management to underwrite 40 Cambria hotels. “Even I was thinking to myself, ‘God, I must be really good, because it doesn’t seem that hard,’” Joyce says. By October, they were underwriting zero. The financial collapse may have put the hotel industry through the ringer, but it prompted Joyce to make key strategic moves that would position Choice and its 11 brands to emerge stronger.

TECH-FORWARD
While it became much more difficult to build Cambria hotels since financing wasn’t available, it pushed the company to refocus on other initiatives, such as overhauling its neglected IT infrastructure. Joyce gave Pat Pacious, who is now Choice’s president and COO, complete autonomy to fix IT operations. Today, about 900 employees work at Choice’s tech and e-commerce offices in Phoenix.

“We rebuilt our entire infrastructure from telecom to the website,” Joyce says. “We were the first with the iPhone app, the first to crossover the 50 percent threshold for online reservations, and the first to break the same for mobile. And we’ve just kept that up.”

Choice’s tech hub competes with the likes of Amazon, GoDaddy, Google, and Microsoft for top talent, he adds. “We run it like a Silicon Valley software shop. We’re agile developers with scrum teams that do 90-day sprints.”

Over the next few months, those teams will deliver the first new reservation system in the industry in 30 years, called choiceEDGE, which Joyce describes as the equivalent of a moon launch. “It’s going to blow the doors off of anybody else looking at it,” he says. “It will give us the technology that could enable us to take reservations for anything, anywhere, anytime, and in any form.”

ENTERING UPSCALE
During the downturn, Choice also saw an opportunity to break into the upscale market. The company put a significant amount of investment behind the Cambria brand to spur developer interest. The move is paying huge dividends now, Joyce says. Choice expects to open approximately 15 Cambria hotels this year, up from two in 2016, and anticipates approximately 30 hotels under construction by the end of 2017. “That’s just going to continue to increase, providing financing stays in place,” Joyce says.
Perhaps the most promising growth vehicle during the recession was the introduction of the Ascend Collection, an upscale network of independent hotels, in 2008. “We were able to grow it rapidly since it is such a strong benefit for an independent boutique or historic hotel to attach themselves to our system without giving up their uniqueness,” Joyce explains. In 2016 alone, more than 40 hotels joined Ascend, bringing the total number of properties in the collection to about 230 worldwide.

As the first major provider of “soft branding,” Choice believes the concept works so well for the company because it has millions of travelers who are looking for hotels in urban and dense suburban neighborhoods, Joyce says. “So I know if we put a hotel there, we’re going to fill it.” Ascend also proved that Choice could move customers from its upper midscale Comfort brand into an upscale or upper upscale environment.