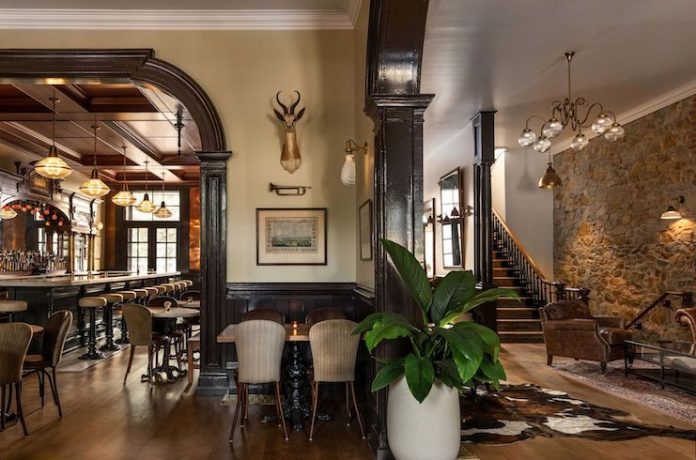 NEVADA CITY—After 24 months of construction, much of it at the height of the COVID-19 pandemic, contractor Lorentz Bruun Construction has completed renovation work on Nevada City’s historic National Exchange Hotel. The hotel reopened on May 6, 2021.

Owner and operator Acme Hospitality embarked on a full-scale renovation of the 38-room hotel two years ago, hiring Lorentz Bruun Construction as general contractor based on its knowledge of historic renovations.

“Ownership’s vision for the renovation has returned the hotel to its former glory and then some,” said Eric Bruun, Lorentz Bruun Construction’s project manager on the National Hotel. “This was a special project and an honor to work on.”

The construction project included full replacement of the roof, significant renovation of the interior, including opening up the hotel’s iconic veranda, and painting of the exterior façade. In addition to its 38 guestrooms, the hotel houses a full-service restaurant and bar.

Opened in August 1856, the National Exchange Hotel was one of the first brick buildings in the Gold Rush mining town sixty miles northeast of Sacramento. Over the years, the hotel has served as a central hub for the community, housing the first telegraph office and serving as the U.S. postal office until 1942. It is believed to be the longest continually-running hotel in California. Among the hotel’s famous guests: Mark Twain, dancer Lola Montez, Ulysses S. Grant, and writer Jack London, among others.

Portland, Oregon-based Lorentz Bruun Construction is celebrating its 75th anniversary this year. The family-owned firm, founded by a Norwegian immigrant after WWII, has experience conducting historic renovations, including those requiring seismic retrofits for a variety of residential and commercial buildings, and is currently in the midst of several historic projects in Portland.