Home Industry News The Inside Inn Was the World’s Largest Hotel During the 1904 St.... 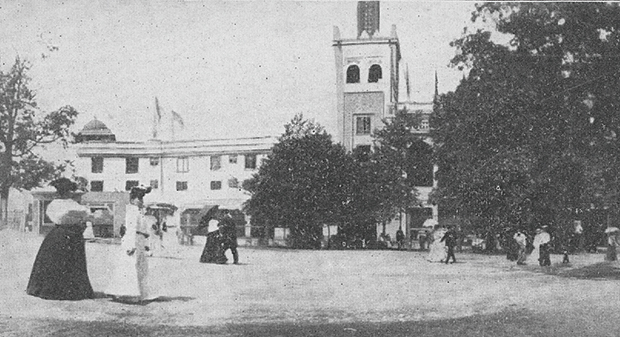 Ellsworth Statler, the legendary American hotelier, was a visionary who applied late 19th and early 20th century advances in technology and modern business systems to hotel operations. In applying these modern efficiencies while simultaneously maintaining the comforts and elegance that customers expected, Statler helped create the most successful American hotel chain of the first half of the 20th century.

Before hotels, Statler operated dining rooms and restaurants. When the Louisiana Purchase Exposition and World’s Fair—better known as the 1904 St. Louis World’s Fair—was announced, his interest was piqued. Fair organizers were worried that the existing hotels in St. Louis would be overwhelmed with visitors. Even with the construction of many new hotels to serve the fairgoers, there was a fear that the scarcity of accommodations might negatively impact the fair and city. Nervous fair organizers approached Statler, who had successfully operated a large temporary hotel at the 1901 Pan American Exposition in Buffalo, New York.

They asked if he would be able to construct and manage a large temporary hotel for the exposition. Statler offered to build a structure that would house fairgoers and provide dining facilities inside the fairgrounds. That hotel—the only one within the fairgrounds —was appropriately called the “Inside Inn.” Although a temporary structure, it was described as the “largest hotel ever built in the history of the world.” It occupied the equivalent of four city blocks and ranged from two to four stories high. Incredibly for the time, the Inside Inn contained 2,257 rooms, 500 with private baths and another 500 with bath/shower combinations; for guests in the remaining rooms, there were common facilities. There were 156 bellboys—as they were called then—to assist the guests. The room rates started at $1.50.

The wood structure used a fireproof material called Sackett Patent Board, plastered over with green fire-retardant burlap wallpaper. Fireproof burlap was used on the ceilings and floors to add extra safety and comfort. The outside of the structure was given a whitewashed plaster appearance with Moorish turrets to look like most of the fair’s other structures.

The kitchen was said to be the largest in the world. For the month of June 1904, it used 12,270 dozen eggs, 1,180 bushels of potatoes, 401,618 pounds of meat, 244 barrels of flour, 9,605 pounds of butter, 8,824 gallons of milk, and 6,014 pounds of coffee. The dining room had the capacity to serve over 2,000 guests with the option of an American or European dining plan. Statler first hired male waiters but later switched to female waiters, finding them more courteous and dependable. The food was described as good and reasonably priced.

Thanks to Statler, the tourists visiting the 1904 World’s Fair were assured of a clean, safe hotel with dining facilities that ran smoothly. The fair ran from May through November. In the end, Ellsworth Statler made a tidy profit of over $360,000—not bad, considering the average American worker earned between $200 and $400 per year in 1904. At the close of the fair, the Inside Inn, like most other fair structures, was demolished and sold for scrap.