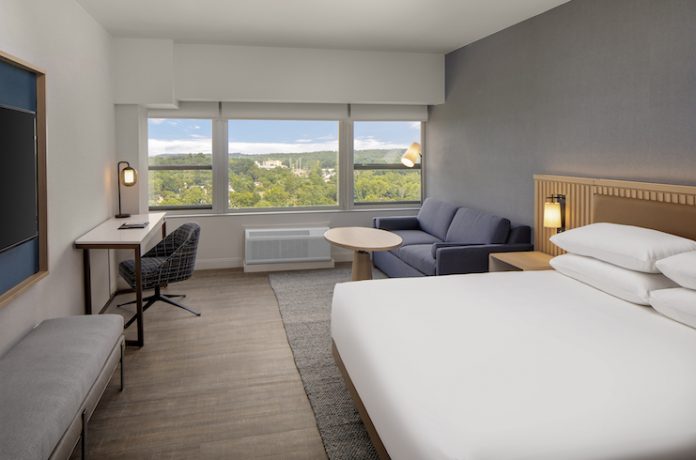 MORRISTOWN, New Jersey — Hyatt Regency Morristown revealed a new hotel experience following a multimillion-dollar renovation. Designed by Gensler, the hotel debuts a transformation of the property’s guestrooms, lobby, food and beverage offerings, and indoor meeting spaces. The property is located in the center of Headquarters Plaza, which is a mixed-use development comprised of the hotel, three office towers, a gym, restaurants, and covered parking, owned by the Olnick Organization and Fisher Development Associates, LLC.

“We are thrilled to announce the completion of an extensive renovation project at our downtown hotel,” said Jeff Babcock, general manager of Hyatt Regency Morristown. “The renovation was thoughtfully designed by Gensler, our neighbors here in downtown Morristown, to incorporate the unique and rich history of our local area. The newly renovated property features a modern colonial theme, which can be observed throughout all aspects of the property. We can’t wait to introduce the reimagined Hyatt Regency Morristown experience to both travelers and the local community.”

The hotel’s lobby has been redesigned to incorporate elements of Morristown’s history. Two Mediterranean-inspired trees are the focal points inside the hotel’s main entrance, which is backdropped by a fireplace fixture and greenery. The public spaces have also been outfitted with furnishings with brass tones and various shades of blue. The refreshed lobby area also includes new carpeting, lighting, and artwork.

Hyatt Regency Morristown’s dining experience includes an updated lounge with evening food service and a new grab-and-go food market and café offering a variety of snacks. The lounge has been transformed to provide an open seating area featuring 30-foot windows that provide views of downtown. In addition, the hotel bar has been reoriented to face the entryway and offers updated seating and lighting.

“To create an accessible, hospitality-driven destination for both guests and the Morristown community, we reimagined how the lobby can be experienced and enjoyed throughout the day,” said Siobhan Barry, design director at Gensler. “The café is now part of a new grab-and-go food market, and the lobby bar is relocated closer to the street for better visibility and ample natural light. The interior reflects Morristown’s revolutionary ties with a modern colonial aesthetic.”

Hallway carpeting is designed to mimic the topography of New Jersey farmlands. The hotel’s double rooms have been converted to queen rooms with two queen beds, and king bedrooms have been outfitted with glass showers. The guestrooms also feature an open concept closet with concealed lighting, in addition to contemporized bathrooms. The hotel’s 50 studio suites were redesigned to provide more accommodations with seating areas including sleeper sofas.

The property’s 31,000 square feet of conference spaces have also been updated, including meeting rooms and the Terrace and Plaza Ballrooms. Groups can host events at a new outdoor venue at the adjacent Pioneer Park courtyard beginning in April 2022. The hotel’s former restaurant was also converted into a new meeting venue and all spaces include updated lighting, furniture, and artwork.

In addition to the accommodations and guest experiences available at Hyatt Regency Morristown, the hotel is close to more than 40 restaurants, shopping, and entertainment venues. The hotel also offers guests complimentary access to the adjacent Crunch Fitness.

Several nearby attractions include Fosterfields Living Historical Farms, a 200-acre farm that produces a historical reenactment of farm life from over 100 years ago. A short drive away is the Schuyler-Hamilton House, the Historical Speedwell, and the Morristown National Historical Park, which features George Washington’s headquarters and more than 24 miles of hiking trails that explore the area. The property is only a 30-minute drive from Newark Liberty International Airport and a one-hour train ride to New York City.

Finance & Development Ellen Meyer - May 24, 2022
Raines Company’s Vice President, Investments, Kristen Myers, observes that many investors sitting on the sidelines expecting distressed property bargains as a result of the...

Finance Kelsey Fenerty - May 24, 2022
Over the past two years, class-level hotel occupancy has served as a proxy to track the recovery of different industry segments. The lower-tier, leisure-based...