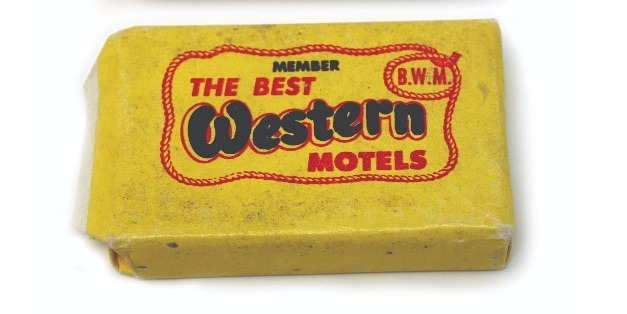 The phrase “today’s trash is tomorrow’s treasure” can be applied to several items in the hospitality industry archive, but especially to the archive’s collection of hotel soap wrappers. The archive is a wealth of historical soap wrappers, and also is home to lots of images of the soap they once covered. When examining soap wrappers from the collection, it became very apparent that these disposable items could reveal a surprising amount of information about a hotel or hotel company. And, while soap wrappers have a limited life expectancy— either tossed out or tossed in a guest’s bag—companies still saw them as a way to sell the hotel name and provide useful information about a property to guests.

1. One example is from Western Hotels, whose name—now Westin—and logo have evolved significantly over the years. In the early 1950s, the top side of the bright red and- white striped Western Hotels soap wrapper showed a modified version of its logo, which incorporated the red “W” shield with an image of a bell hop carrying luggage. The reverse side of the wrapper was used as a vehicle to inform guests that the Western Hotel chain included 22 hotels, that reservations could be made free of charge from any one of them, and that the bar was from a brand called “Colgate’s Floating Soap.”

2. This Best Western Motels soap and wrapper sample—likely from the 1950s or early 1960s featured the familiar rope circling or lassoing the Best Western name with the word “Western” in a larger and different font than its current logo, all with a bright yellow background. The bar of soap itself was embossed with the words “Best Western” in the same font and size that appeared on the wrapper. This pattern identifies the example as coming before 1962, when Best Western adopted a crown into its signage. The wrapper further reflected industry norms of the time in that it clearly identified Best Western as a motel rather than a hotel. Also, the word “member” signified that Best Western was an association of independent motels, not a company.

3. The final example is a wrapper from Statler Hotels that dates back to either 1953 or 1954. While not widely known now, Statler Hotels set the standard for the industry in the first half of the twentieth century. The wrapper had the distinctive Statler font, which was adopted after World War II, with the characteristic green background. It also listed the eight hotels that comprised the hotel chain at that time, plus the Hartford property set to open in the summer of 1954. The company used this throw-away amenity as one more opportunity to list the cities where their hotels could be found.

These soap wrappers show that the industry, regardless of lodging chain size, sought to maintain standards and provide a consistent product, even in items as mundane as guest soap. Moreover, if the soap were to be used in the hotel room or brought home by the guest, the wrapper could display the hotel name and logo, along with pertinent information for future bookings. Serving as a small but important part of the hotel’s advertising campaign, the soap bars and their wrappers proved effective marketing tools for the lodging industry, and help today’s historians relate the industry’s past.