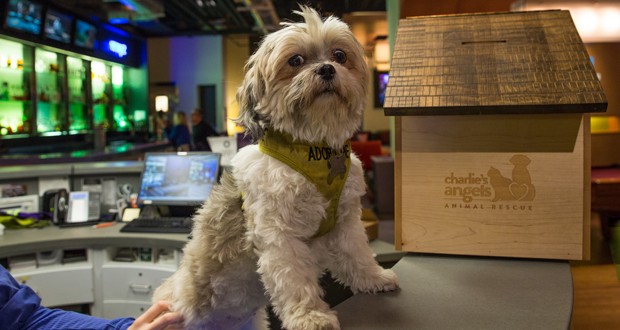 McKibbon Hospitality’s foster dog program—in which one adoptable pup lives at a hotel at any given time—started when two strangers on an airplane decided to bond over pet photos. On a flight three years ago, Emma Ledbetter, director of food and beverage at McKibbon Hospitality, sat next to Rick Wilson, a board member of North Carolina animal rescue organization, Charlie’s Angels. The two naturally broke out their phones to show photos of their pets. On the return flight, Ledbetter and Wilson found themselves sitting side-by-side again. That sheer coincidence led to a conversation about launching a partnership between the hotel management company and the animal rescue.

Here’s how Aloft Asheville’s foster dog program works: the hotel’s partner, Charlie’s Angels, vets each dog and provides the hotel with background information. When a new foster dog arrives, the hotel initially keeps the dog in the property’s back office for a day to become acclimated to the new environment. Then, the dog is moved to what Ledbetter describes as a play pen on the second floor of the hotel in view of guests. A sign at the lobby desk explains the program and showcases a profile so that guests can learn more about the dog.

Guests are also able to sign a waiver to walk the pup in a designated area in view of the front desk. The hotel staff are tasked with caring for the dog and logging behavior. Collaboration is key to the program’s success, Ledbetter explains. “It’s a great idea in concept, but if your team can’t execute it and be a good home for this dog while they’re waiting to be adopted, then it wouldn’t work.”

The program is part of a greater culture at McKibbon to encourage the company’s 87 hotels to get involved in the local community through service projects—dog-related or not. Each of the hotel’s foster programs has its own local partners and its own take. Aloft Greenville Downtown has a locally-made dog house and works with various sponsors to supply adopted dogs with collars and leashes. A staff member at Aloft Tallahassee Downtown painted a mural on the wall behind the hotel’s dog pen. “It’s not just us adopting the dogs,” Ledbetter explains. “It’s about community engagement and building relationships as well. We have to have good partners to be able to make it work.”

These programs also fit into McKibbon’s efforts to connect guests at the company’s lifestyle properties with unique and meaningful experiences. Providing a temporary home to adoptable dogs bring a sense of community and family to both guests and employees, Ledbetter explains. She says that hotel staff are excited when it’s their turn to to walk the foster dog, and even business travelers will go out of their way after a long meeting to say, ‘hello.’

“Dogs make people happy,” Ledbetter explains. “They make people feel more at home.” Aloft Hotels coin themselves as pet-friendly—the hotels offer fee-free stays for pets and other amenities to accommodate them, such as special dog beds, bowls, and the like. Even so, guests aren’t always able to travel with their furry friends. “Even if they can’t bring their dogs if they’re traveling on business, we have someone who’s going to greet you and wag their tail when you walk up the stairs to go back up to your room,” Ledbetter explains.

Then there is the crux of the program—more than 130 guests, locals, and hotel employees have brought home a new friend. “A lot of families will send heartfelt letters—‘Thank you for our new family member. We’re complete now,’” Ledbetter says. Families have even chosen to rent a car to drive their newly-adopted dog home rather than flying back as they had originally intended—all because they met ‘the one.’ Ledbetter knows the feeling—she met her own adopted dog, Ladybug, through the program.

“I know how much she changed my life and I can just imagine all these dogs and how spoiled they are at home instead of sitting in a shelter,” Ledbetter explains. “It’s an amazing feeling knowing that all these dogs have a great place to live.”