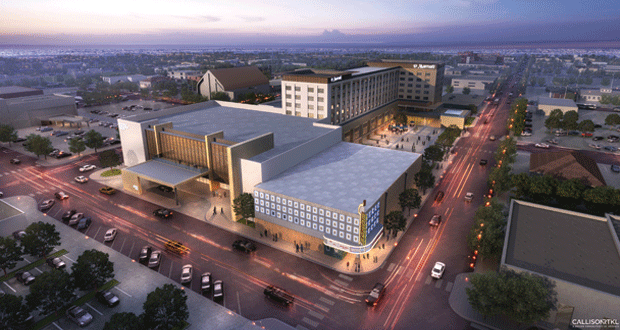 DALLAS – The City of Odessa, Eofficial Enterprises, and Dallas-based Gatehouse Capital, broke ground on a seven-story, 218-room Marriott Hotel with a 67,500 square-foot conference center, a 365-space parking garage, a full-service Starbucks, and plans to refurbish the historic Ector Theater, originally built in 1951.

“We started this journey in the fall of 2014 and have spent the last two and a half years collaborating with the City, as well Eofficial Enterprises, to bring this project to life,” said Marty Collins, CEO of Gatehouse Capital. “This project will have a tremendous impact on Odessa and when finished, we will have built a best of class hotel and conference center for the Marriott brand.”

“Sondra and Toby Eoff are native Odessans and are true corporate citizens who see this project as an opportunity to give back to Odessa in an economically productive way,” stated Collins. “Odessa is a great city with a strong business community that is completely committed to the revitalization of downtown. This will be a huge step and its goals for the area.”

Sondra and Toby Eoff with Eofficial Enterprises will invest $48 million in the multi-million dollar project. City officials will spend $31.6 million – that includes the hotel, conference center, and parking garage.

Odessa, founded along the extension of the Texas and Pacific Railway in the late 1920s, is celebrating its 90th anniversary in 2017. Odessa was thought to be named by the railroad workers who believed the region resembled their home in Odessa, Russia. Once a sleepy cowtown until the first producing oil wells began producing, today Odessa has a thriving population and is among the top 20 fastest growing cities in Texas.

“We expect this project to create jobs and generate over twice its cost in direct and indirect benefit for the city with solid economic returns,” Collins remarked. “This is an outstanding example in our public-private platform of development.

Founded in 1997, Gatehouse Capital is a national real estate investment and development firm that has launched hotel developments in the Hilton, Marriott, and other brand families – totaling more than $1 billion in completed development.