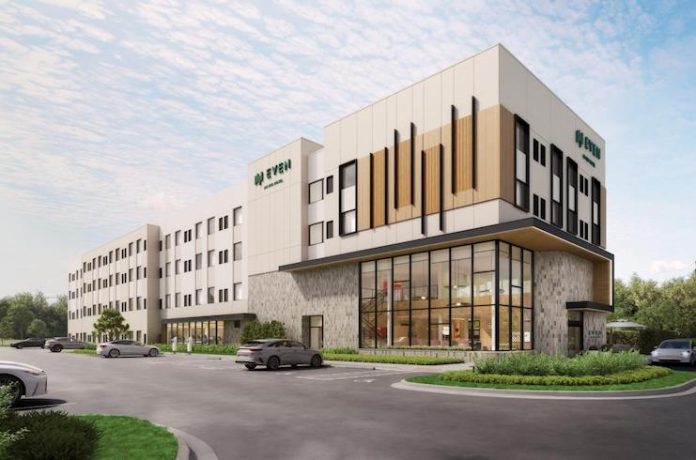 Speaking to LODGING at the Lodging Conference 2022, where the updated EVEN Hotels prototype was being introduced, Raul Ortiz, vice president of global marketing and brand management, Holiday Inn & EVEN Hotels at IHG, described the latest version of that brand, which opened its first property back in 2014. He touched on the prototype’s biophilic design, expanded fitness options, and a restaurant concept that will be incorporated into other IHG properties. He also discussed what sets this brand apart from others in its competitive set and how it fits into the IHG portfolio of options for guests and owners.

EVEN Proposition Then and Now

Ortiz says, unlike traditional wellness-oriented resorts and super-luxury hotels aimed at “the uber elite,” EVEN’s first version was designed for wellness-minded business travelers. “To help them maintain their healthy practices when they were on the road, it was based on a relatively simple proposition—providing healthy food options, a great sleep experience, and a well-equipped gym to support their fitness routines,” he explains.

Although the basic proposition hasn’t changed, he says, improvements developed in collaboration with franchisee and the input of third-party consultants, including human performance experts Exos, and found in the latest prototype can be broken down into “three pillars”—all of which he says were created with flexibility and choice in mind for a wider range of health-minded travelers, including leisure, more affordably.

The activity piece, he says, is addressed with “plenty of options to keep our guests moving.” Describing the athletic studio, he says, “It is three to four times the size of your average hotel gym and has awesome equipment for strength, core, and cardio, including three to four treadmills, Peloton bicycles, free weights, and strength machines.” He says the prototype includes in-room fitness options delivered through three new room types, some of which enable an in-room fitness experience with a wall trainer for strength and resistance and a space for yoga that can be done in the room with a yoga brick.

The food and nutrition component is meant to appeal to traditional guest as well as the target demographic. In addition to Cork & Kale Market and Bar, where guests have always been able to find a wide variety of healthy food choices, smoothies, and gluten free options, as well as cocktails and desserts, Ortiz says the prototype includes a new restaurant concept called EVEN Kitchen and Bar, which meets the needs of guests wanting to eat healthy on the road while also offering options for guests wanting to indulge. “This F&B concept is built off the insight that health and wellness minded travelers don’t necessarily want good-for-you food all the time. In fact, many of them work out, just so they can be free to eat what they want.” so that they can eat, what they want to eat. That’s why it has a two-sided menu—a more nourishing side of the menu, and then it has a more cravable side.”

He says the restaurants—which require retrofitting in existing hotels—have already been launched in three hotels, and he expects another two will open shortly.

Ortiz says, all rooms are designed for relaxation, with spa-inspired showers and a premium sleep system with natural eucalyptus fiber bedding, but adds that the entire design style is inspired by biophilia, describing how the overall tone, look, and feel of the public space—with a green wall and a two-story lobby whose windows let in a lot of natural light—support the relaxation experience. “This is a very different entry experience relative to traditional hotels at this price point.”

Ortiz says the new EVEN “kind of rounds out the hotel types that we want to be in,” asserting, “Having a prototype like this allows us to take some of its elements to create a more consistent experience across properties including urban properties and conversions. This prototype in particular will be efficient to build and operate, with a more manageable level of labor for the price point. At the cost per key to build, it really lends itself well to suburban and secondary markets with new construction, where they can get up fast and enter the market as quickly as possible.”

Ortiz says hotels with the new design will be seen at upcoming openings in Austin and Waco, Texas, and Long Island City.