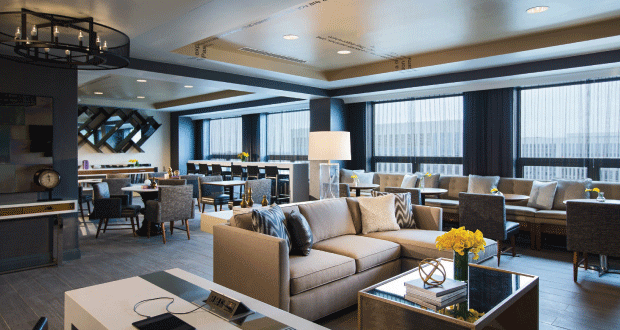 Following Laurus Corporation’s acquisition of the property in 2013, the Renaissance Chicago O’Hare Suites Hotel recently underwent a $6.5 million renovation of its 326 guestrooms and public areas. The hotel is steps away from the “L” Blue Line to downtown and a short ride to the airport, making transportation a natural theme to weave into the redesign. Hospitality design firm The Gettys Group devised a narrative that called for a sophisticated modern traveler who embraced Chicago’s neighborhoods and experiences, and the notion of travel and transit, explains Principal Meg Prendergast. “Rather than focus on being an airport hotel, we focused on being 15 minutes from downtown of a major international city,” she says. In the new casual restaurant, Asado Urban Grill, the carpet showcases a custom design based on an aerial view of the train tracks coming in and out of the city. Other connections to downtown Chicago include a large black and white photograph inside the guestroom of a loft looking out to the city skyline.

Sense of Discovery
The full makeover of the Club Lounge provides a better dining environment for multiples and single travelers, as well as a refreshed buffet area. “The new ceilings captured the bon mots from Chicago authors and local people of note for a fun, discoverable moment for club members and their guests,” Prendergast describes.

Stay Connected
The Gettys Group also ensured that the redesign kept guest connectivity at the forefront. “Wherever possible, we added connectivity for guests and hotel visitors for the ease and ability to work, live, and play anywhere in the hotel,” Prendergast says.

Make it Pop
The public areas feature the same lustrous light neutrals and accents of metallic gold and charcoal applied in the guestrooms, “with an additional pop of bright aubergine to give some depth and balance.”

AHLA LODGING Staff - November 23, 2020
WASHINGTON, D.C.—As the holiday season approaches, American travelers have an abiding desire to travel, even as the country navigates the challenges of the pandemic,...

Conferences and Events LODGING Staff - November 23, 2020
In light of the COVID-19 pandemic, several hospitality industry conferences have postponed or gone virtual with events, while others are moving forward with their...