Home Design Check Out: Guestrooms at The Diplomat Resort in Hollywood, Fla. 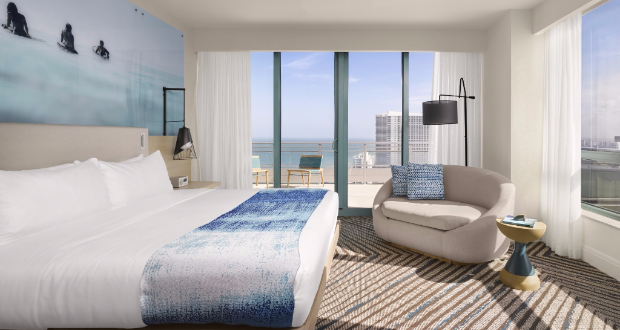 With a history that began in the late 1950s, The Diplomat Resort in Hollywood, Fla., has hosted presidents, performers, and celebrities alike. In the late 1990s, the hotel was foreclosed upon and leveled with 500 pounds of dynamite, allowing builders to start from scratch and create a new legacy for the building that now stands in place of the original. In 2014, The Diplomat became the third property to join Hilton’s newly launched Curio Collection, and in 2017, The Diplomat completed a $100 million renovation. The property’s owners made the interesting decision to introduce two different design concepts to the hotel’s 1,000 guestrooms. Sunrise rooms face the Florida coast, offering views of the Atlantic Ocean and making the most of the light that enters the rooms with the rising sun. On the other side of the property, rooms face the Intracoastal Waterway, showcasing sunset views. Sunrise rooms feature light, airy designs, reflecting the soft tones of the early morning; sunset rooms have bolder, more vibrant elements that make the room come alive at night. This approach ensures that repeat guests have a different experience with each visit and that they don’t become bored with one design scheme. Jana Dadant, senior designer at Hirsh Bedner Associates (HBA), the firm that designed the property, says, “We wanted to create something that was just very sophisticated.” 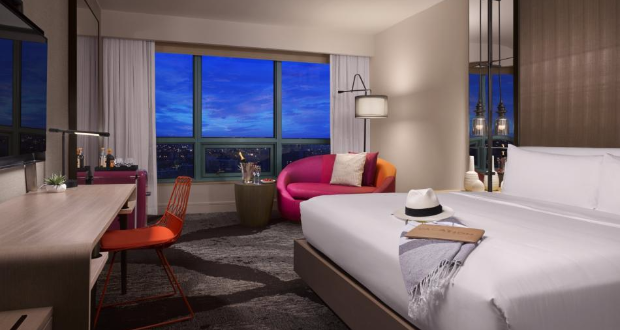 Artistic Wall Coverings
While the sunrise rooms lend themselves to artwork, the sunset rooms instead feature wooden headboards and wall hangings. This variation makes the rooms look dramatically different.

Furniture Homage
To honor the property’s rich, midcentury history, furniture is designed without angles, as it would have been in the 1950s. Dadant says, “We wanted to go back to making The Diplomat iconic again, so the rounded furniture is a nod to its midcentury roots.”

Colorful Accents
Crisp turquoise and aqua shades brighten the sunrise rooms, while vibrant pinks and oranges highlight the sunset concept, though both color schemes call back to the Florida sun. Dadant says, “The splashes of color are very directly inspired by the time of day and the light of the sun.”

Ocean Floor
Designs in the carpets reflect the movement of ocean sand in the morning and evening. “In the sunrise rooms, the carpet was inspired by the bubbles of the shore break. For the sunset scheme, we played on the visual of seaweed for the carpet,” Dadant says.

Development LODGING Staff - May 11, 2021
NORMAN, Oklahoma – NOUN Hotel, a four-story boutique hotel, has broken ground and is expected to welcome its first guests in summer 2022. Located...

Technology LODGING Staff - May 11, 2021
According to recent data analyses, a travel boom is expected for summer 2021. As many hotels have experienced low occupancies, they've been forced to...