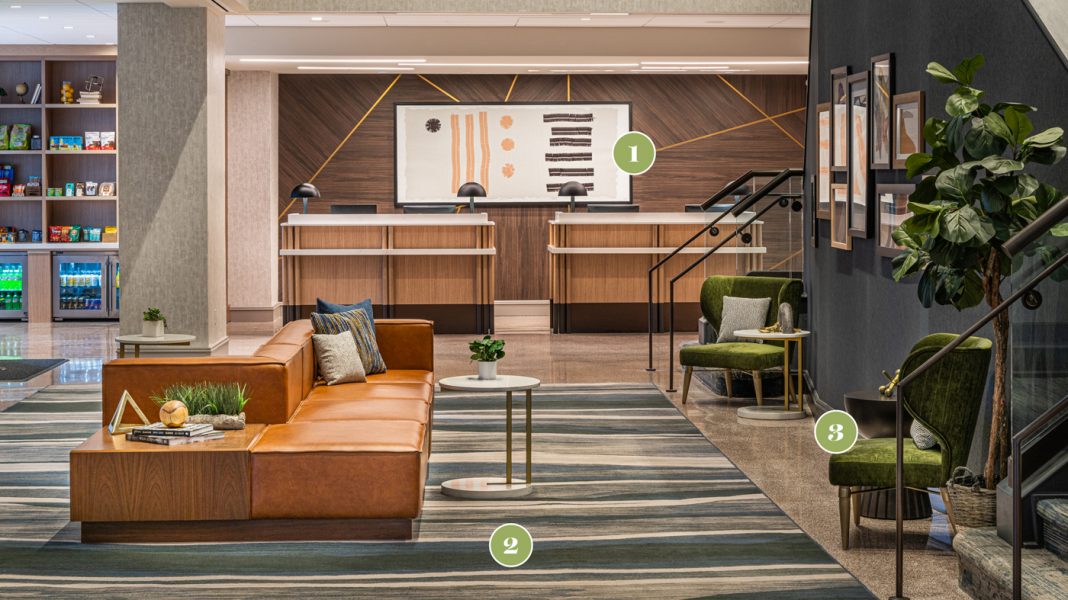 The Sheraton Reston Hotel in Virginia recently underwent a full renovation of its public spaces and guestrooms. Owned by Wurzak Hotel Group and DoveHill Capital Management, the six-floor, horseshoe-shaped hotel combines 302 guestrooms, including 10 suites, with nine meeting rooms, grand ballrooms, and amenities including a new fitness center and Sheraton Club Lounge. Catie Cannon, interior designer with Washington, D.C.-based architecture and design firm //3877, says that the lobby design marries this unique floorplan with Marriott International’s new Sheraton prototype, which favors a vast, open-flow lobby where the bar is a central hub of the space. To adapt the prototype to the Sheraton Reston Hotel’s double-height lobby, a grand staircase leads to the mezzanine level where guests will find the hotel bar. “Because of the shape of the hotel and where all of the meeting rooms are, the lobby very quickly becomes like a pre-function meeting space, so the challenge was making this small area around the reception feel really active,” Cannon explains. “We made sure the walls were open so that some of the sound and activity from the second level floats down into the lobby space and draws guests upwards.” Cannon adds that design elements throughout the hotel highlight the property’s mid-century-influenced architecture while paying homage to Reston’s history as a “new town”—one of the first fully master-planned communities in the country, developed to connect residential and commercial areas via shared green spaces and park systems. Drawing inspiration from this history, the lobby is a public space connecting the different guestroom and meeting areas of the hotel—a communal hub where mid-century style and multi-use seating allows guests to work, relax, and socialize.

Behind the reception desk, Cannon points out the lines in the artwork and custom wall covering “create some verticality even though the ceilings are much lower there.” Gallery-style groupings near the staircase and on the second-level landing showcase additional art.

Lines throughout the lobby are used as wayfinding tools to direct guests from point A to point B, Cannon says. “In the rug, for instance, we see all of these horizontal lines leading from the main entrance on the left side of this photo to the reception desk and up the stairs.”

The design team used a color palette based on blues and greens to tie in the beauty of local parks and the Potomac River. “The natural light in this space allowed us to play with color,” Cannon explains. “There’s a lovely saddle color, and then on the other side of the lobby, pinks and ochres. We used color to create different zones.”