HENDERSONVILLE, Tennessee — Texans displaced by freezing temperatures and outages pushed the state’s hotel occupancy to a 50-week high, according to an analysis by STR.

During the week of February 14-20, 2021, Texas hotel occupancy reached 56.3 percent. That 50-week high in the metric contributed 0.9 percentage points of the three-point gain in overall U.S. occupancy (48.1 percent) for the week. Texas’ occupancy level grew 9.4 percentage points over the previous week, which is the largest week-over-week occupancy increase for the state in the last year. Average daily rate (ADR) rose 5.8 percent week over week, which was Texas’ largest gain in the metric since the week of New Year’s.

“Texas hotels are no stranger to housing displaced guests during a pandemic,” said Isaac Collazo, STR’s vice president of analytics. “Similar to what we saw with Hurricane Laura, there was increased hotel demand for most markets because there wasn’t a great deal of business to lose ahead of the storm. We would have likely seen higher hotel performance across the state had hotels not experienced similar power and water loss as homes, in addition to the limited number of rooms available in some hotels due to reduced staffing as a result of the pandemic.”

“Fortunately, we have seen Texas hotel occupancy trending slowly upward in five of the past seven weeks,” Collazo added. “Different from the impact of Hurricane Laura, we expect performance to continue on this course due to increased demand from insurance adjusters and displaced residents, as water damage from frozen pipes still remains in many homes and businesses throughout the state.”

Texas East (up 6.6 percent), Texas South (up 2.4 percent), and McAllen/Brownsville (up 1.2 percent) were the only markets to see a year-over-year increase in the metric. However, all Texas markets, except Texas North, saw a week-over-week lift in occupancy.

Each market saw year-over-year decreases in ADR, while McAllen/Brownsville was the only market to register a year-over-year increase (up 1.1 percent) in revenue per available room (RevPAR). 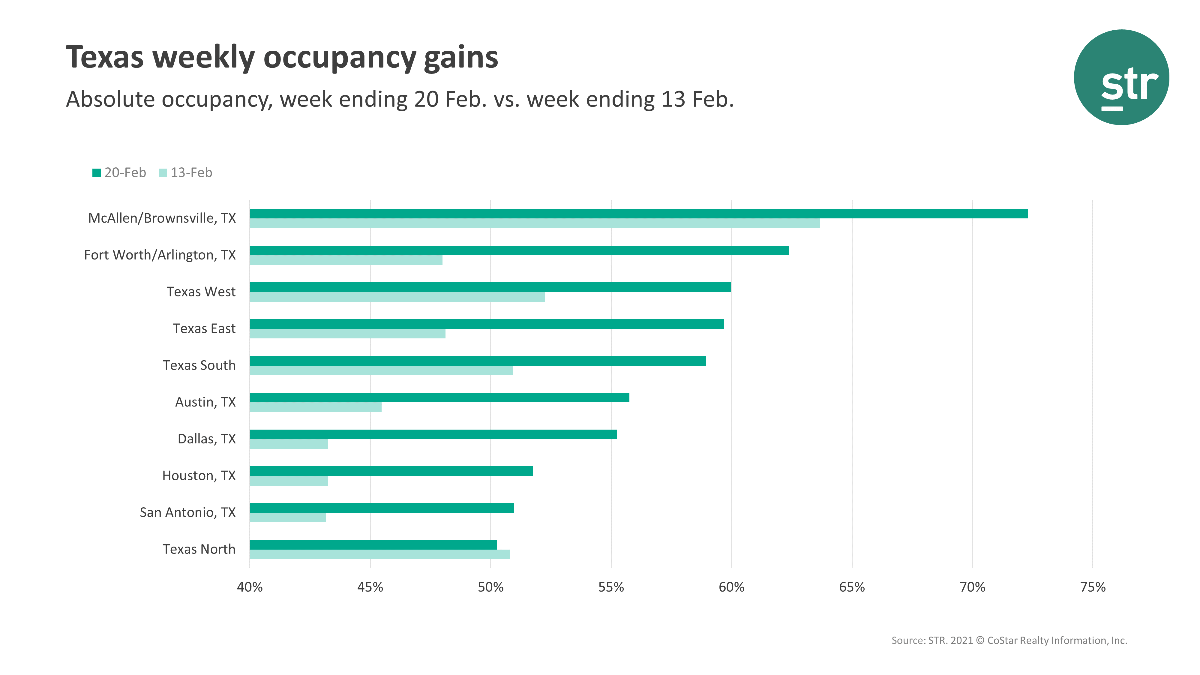