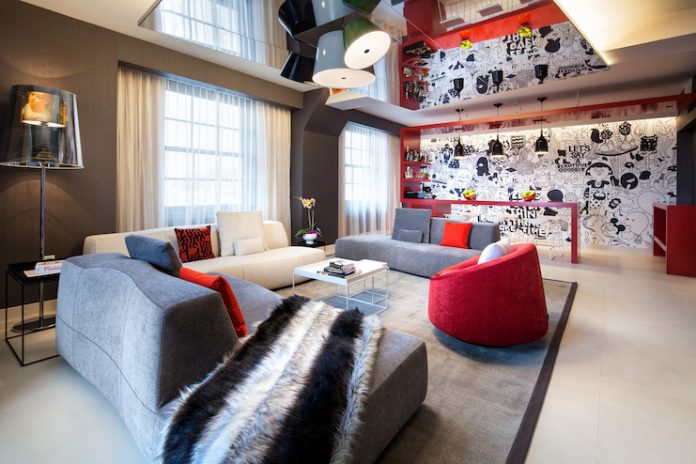 “It’s been a decade since W Washington D.C. opened its doors and forever transformed the nation’s capital with a bold and dynamic energy that has been embraced by the city’s power players and visitors alike,” said Anthony Ingham, global brand leader, W Hotels. “This complete reimagining further cements the hotel as the ultimate can’t-miss destination in the heart of the city and it also marks an important and exciting milestone in our substantial renovation strategy currently underway at many of our W properties in North America.”

A sleek waterfall greets guests upon entry—an homage to the city’s many memorials that use water. The welcome desk has large glass columns which pull from the surrounding architecture. Political cartoons referring freedom of speech by artist Amit Greenberg are wrapped around the desks of each welcome desk pod.

The hotel’s lobby—the “Living Room”—includes a geometric-shaped lobby bar, a mirrored ceiling that evokes the city’s reflective memorials, cut-out graphics of lobbyist symbols stamped into the Living Room’s archways, and a replica of the Capitol’s dome ceiling fresco (“The Apotheosis of Washington”) above the bar.

The hotel’s renovation includes the reimagining of its guestrooms, increasing the total to 326 rooms, including 15 “Fantastic” suites, eight “Marvelous” suites, seven “WOW” suites, and one “Extreme WOW”—the brand’s take on a presidential suite. The hallways that lead to the rooms play with lighting, with beams of light followed by dark shadows to symbolize the two sides of the aisle. Neon art by Amit Greenberg adorns each hallway, inspired by presidential portraits and ubiquitous D.C. handshakes. 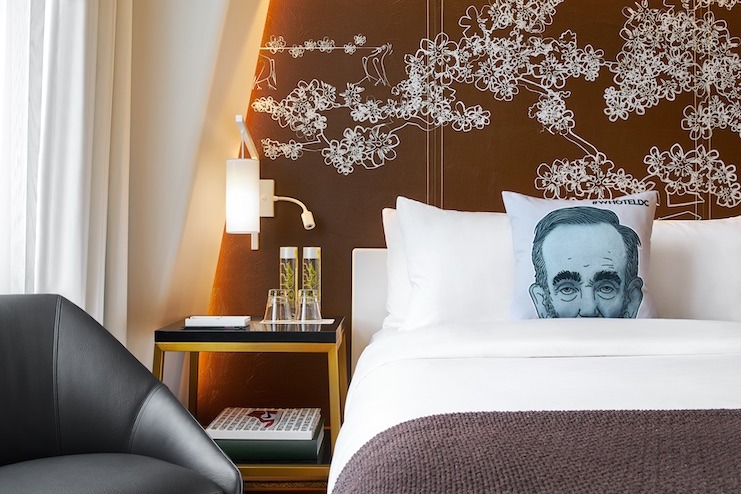 Each guestroom remixes classical architecture with bold style and playful references to the city. The studio layout includes modular seating, open-flow bathrooms, marble vanities, and cherry blossom motifs on the headboard. Other touches include minibar towers and side tables angled and the same shape as the Washington Monument; green, window-style couches that convert to an extra bed; exclusive pillows by Amit Greenberg featuring caricatures of U.S. presidents which can be held up as a mask for political selfies; and artwork in the bathrooms of ripped cartoons that reference politics and D.C. history.

The Extreme WOW Suite includes a floor-to-ceiling graphic mural by Amit Greenberg—“State of Cartoons”—using the surrealist technique of automatic drawing; a sliding door with cryptic lettering (inspired by the Kryptos sculpture of the CIA); and mirrored ceilings that capture views of the National Mall and monuments below. The 1,176-square-foot, one-bedroom, 1.5-bath suite also adjoins with its neighboring room, providing additional bedrooms for a full entourage (or an entourage of security detail).

POV, the hotel’s rooftop with views of the White House, is now a year-round destination with floor-to-ceiling retractable glass windows on the terrace and windows that open out in the lounge. POV has a beverage menu with creations by Amsterdam-based collective Cocktail Professor and an ocean-to-table food menu.

Corner Office serves artisan wood-fired pizzas and has 38 rotating taps and a Master Cicerone-trained staff. The restaurant also has bocce courts in the beer garden during the warmer months, a curling rink in the winter, and murals created by local artists Gaia, Mike Tanoory, and Aniekan Udofia.

The renovation transformed the hotel’s 12,000 square feet of meeting and event space, including the Great Room, which has new angled LED ceiling lights with changeable colors to match any theme; a built-in bar; and custom carpeting that evokes a map of the city’s streets.

Other event space options include Altitude, the rooftop ballroom, which includes private access to POV; Studio meeting rooms, with built-in pre-function space, natural sunlight, and retractable room dividers to accommodate up to 230 guests; and Focus meeting room, which overlooks the lobby.

“From two brand-new restaurants offering distinct culinary experiences to reimagined, design-led suites and new event spaces, the transformation boldly captures what W stands for,” said Meade Atkeson, general manager, W Washington D.C. “As W Washington D.C. continues to turn the traditional luxury experience in D.C. on its head, we are thrilled to welcome guests back to take in all that we have to offer.”