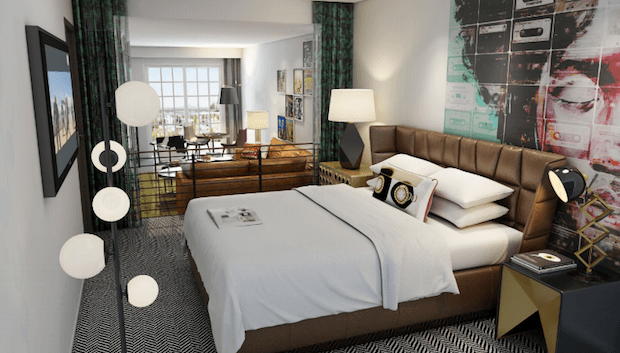 Both hotels are OLS Hotels & Resorts properties with redesigns by design and architecture firm Perkins+Will. However, each property will have its own unique personality that caters to today’s modern discerning traveler while offering a boutique, personalized experience. The Chamberlain West Hollywood’s renovation is expected to finish in March 2018 while renovations to Montrose West Hollywood’s will be completed in April or May. 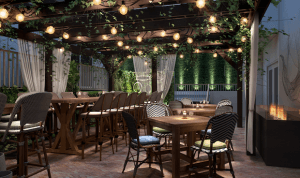 Located steps away from the famed Sunset Boulevard, The Chamberlain West Hollywood will debut its new redesign and restaurant concept in March 2018. Re-imagined as a stylish retreat for A-list insiders, the hotel’s new design will have sophisticated interiors that are reflective of old Hollywood glamour while appealing to the up-and-coming starlet.

Designed by Perkins+Will, The Chamberlain West Hollywood’s new lobby and 114 suites will have monochromatic tones, carefully curated art pieces, and luxe velvet and leather furniture. At the helm of Executive Chef Henry Tapia, The Chamberlain’s new restaurant and bar will serve New American cuisine in a contemporary atmosphere that evokes the feeling of an intimate Hollywood hideout—including a garden patio with a fire pit and trellis.

Montrose West Hollywood, formerly known as Le Montrose Suite Hotel, will unveil its renovation toward the end of April or early May 2018. Designed by Perkins+Will, Montrose West Hollywood will have an “upscale urban” vibe to inspire artists and entertainers who are seeking a place that feels like home in West Hollywood. The hotel is located on a quiet, tree-lined street that’s within walking distance of Sunset Boulevard and Santa Monica Boulevard. The property’s new interiors throughout the 132 suites and public spaces will celebrate Hollywood’s past and present music industry while incorporating eclectic furniture, lighting, and art pieces that provide a memorable, distinctive design with residential scale.

The hotel’s new co-working and lounge spaces will function as hangouts where guests can be creative and collaborate with friends and colleagues. A new grab-and-go café will provide business travelers and other guests with dining options on the run. The updated restaurant will provide a contemporary menu from Michelin-rated Chef Bryan Achay with breakfast, lunch, and dinner. In addition, the hotel’s grab-and-go café will offer “Urban Apron” kits, influenced by the popular recipe delivery services, for guests to prepare meals in their suites’ kitchenettes.