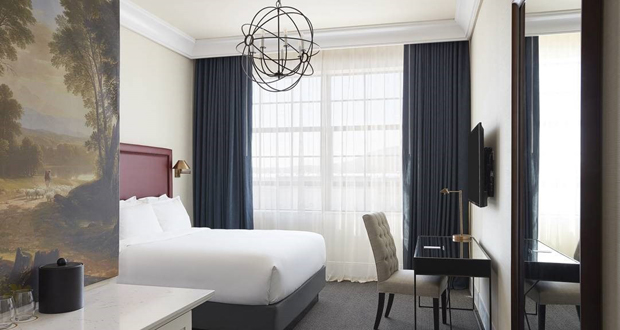 NEW YORK—Tribute Portfolio, part of Marriott International, has arrived in Hudson, N.Y., with the opening of The Wick Hotel at 41 Cross Street. The original building was constructed in the mid-19th century as a candle and soap manufacturing facility, before undergoing a transformation into a boutique hotel in the last year. With its four-star service, The Wick is poised to highlight Hudson as a destination for global business and leisure travelers while supporting the independent spirit of the local community.

“We are thrilled to debut a Tribute Portfolio hotel in Hudson, a city driven by a creative energy that lends inspiration at every corner,” says Jennifer Connell, vice president of brand marketing and management for Tribute Portfolio. “We believe in seizing the moment to experience something new, to grow and expand, and we are excited to connect the community in Hudson with our indie-spirited design, sincere service, and vibrant social scene.”

The city of Hudson is known for its independently owned shops lining the central Warren Street area. The city has dozens of art galleries, locally sourced food purveyors, and a diverse range of restaurants. With a long history as a flourishing arts community, Hudson’s rich architecture is preserved in landmark buildings and its arts and dining scene.

Originally built in the 1860s, 41 Cross Street was a manufacturing hub for key industries of the time: first as a soap and candle factory, then textile manufacturing, and later a knitting mill. The Wick is the latest adaptive re-use historic preservation by Redburn Development, and a nomination to the National and State Historic Registers is in process.

“With The Wick, we saw a great opportunity for Redburn to bring our approach to historic preservation and green energy building to Hudson,” says Thomas Rossi, principle of Redburn Development. “And partnering with Marriott as a Tribute Portfolio helped us seamlessly blend the independent spirit of the property with world-class guest service.”

With 55 guestrooms, including seven suites, The Wick Hotel honors the building’s heritage throughout the design, mixing modern and industrial elements with original artwork from the Hudson River School. Details include the restored 1860s hardwood floors, denim-style wall coverings, candle-making patents, and signature lighting. Original 19th-century Hudson River School landscapes by Thomas Cole, in reproduction with permission, hang in each guestroom and the work of modern Hudson River School painter Jane Bloodgood-Abrams is in the lobby.

Partnering with local craft beer, wine, and spirits producers, The Wick serves a selection of signature drinks at the lobby bar along with locally sourced light fare. The property also has a spa treatment room, fitness center, boardroom, and event space.

A block away from the Amtrak station (HUD), The Wick is a two-hour train ride from New York City’s Penn Station and is within reach of landmarks such as Olana, Basilica Hudson, and Hudson Hall.