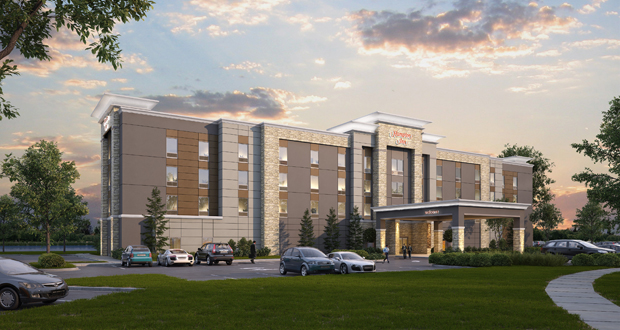 In 2017, the brand opened an average of two hotels per week globally and eclipsed the 100 new hotel milestone for the third consecutive year. “Following a strong year, we are building upon that momentum by capitalizing on the demand for upper-midscale hotels around the world,” says Shruti Gandhi Buckley, global head, Hampton by Hilton. “Hampton remains the category killer. It’s truly everywhere our guests want and need to be. Pairing that accessibility with our longstanding commitment to guest satisfaction, makes Hampton the ideal choice for travelers.”

The brand’s newly opened U.S. properties in the past two months include:

Hampton Inn & Suites by Hilton Knightdale Raleigh
Only 10 minutes away from downtown Raleigh, N.C., guests will appreciate the hotel’s close proximity to Knightdale Station Park and Midtown Commons, offering easy access to department stores and dining options. Nature enthusiasts can take advantage of the hotel’s location near many parks, trails, and outdoor attractions including Pope Strawberry Farm, enabling them to explore Knightdale with ease.

Hampton Inn & Suites by Hilton Sacramento at CSUS
Situated near downtown Sacramento and next door to Sacramento State University, the hotel is conveniently located near Sacramento’s Regional Transit stop, offering guests access to light rail and bus transportation. Guests can enjoy many of Sacramento’s local attractions including the Sacramento Zoo, the California State Capitol Building, and the shopping, dining, and historical landmarks of Old Sacramento.