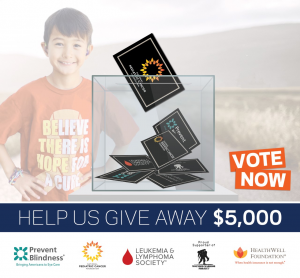 Chattanooga, Tenn. — HOTELSIGNS.com has launched its annual charity giveaway, now in its third consecutive year, and is seeking participants from the hospitality industry to vote on their favorite charitable organization. This year’s nominees are the following: Prevent Blindness, National Pediatric Cancer Foundation, Leukemia & Lymphoma Society, Wounded Warrior Project, and HealthWell Foundation. Everyone is able to vote once a day until the end of the voting period.

It’s been another fantastic year for HOTELSIGNS.com, according to company CEO Hank McMahon. He shares, “Thousands of branded and independent properties have depended on HOTELSIGNS.com for their signage, and now it is time to give back as we reflect on 2019. As we have done in years past, we pay out the charitable contribution to the winner in December, and always provide a $1,000 donation to each runner-up charity.”

The winning charitable organization will receive a $5,000 donation from HOTELSIGNS.com’s parent company, Intersign Corporation. He adds, “I urge all in the hospitality industry to take advantage of the great times we are experiencing as an opportunity to give to those less fortunate among your communities.”

HOTELSIGNS.com’ third annual charity contest runs until December 18, 2019, at 11:59 p.m. ET, with the winner to be publicly announced in January.