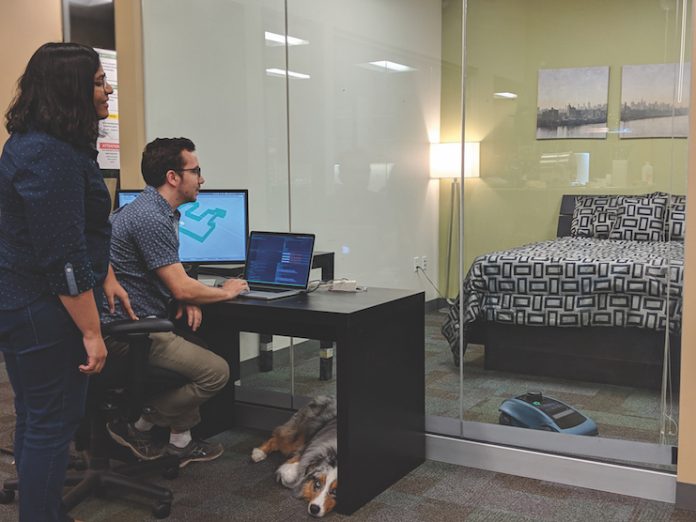 When the LODGING team first met Maidbot founder and CEO Micah Green in 2016, his company was a small robotics startup in the midst of launching a pilot program around its guestroom-cleaning robots. Now, with plans to integrate 100 working units into hotels all over the country by the end of the year, Green’s focus is broader, and he’s starting to see exactly how the technology pioneered by Maidbot could change the hotel industry at large.

Maidbot’s housekeeping robots (called “Rosie” by Green and the Maidbot team, after the Jetson’s housekeeper) clean guestroom floors while room attendants take care of the rest. “When we last spoke, we had just launched our first pilot with a partner in Houston,” Green says. “That was our first technology lesson and deployment experience, and by all accounts, it went really well. It also made clear what should be our areas of focus. It’s very different once you introduce a product to end-users—in this case, room attendants and management—and start to encounter all of the little variations in environment that need to be addressed for a larger rollout.”

“We’re on the front-end of robotic innovation in the service industry. We’re painting the picture, we’re writing the rules. That puts a lot of pressure on us to get it right. At the same time, that means we are true pioneers.”

Right now, Rosie’s assimilation into hospitality is mostly in the upscale and luxury segments, which are faster to adopt new technology. However, Green expects that to change as well, noting that Maidbot’s fleet has the potential for value in any hotel. He explains, “The technology is new, so people are very excited about it and eager to introduce it to their properties. However, success does somewhat depend on the demographic of room attendants. Some will be much more familiar with technology than others, and for some, it takes a little more time to adapt to this kind of assistant. There’s definitely a learning curve.” Maidbot has added a team of deployment specialists to help with that learning curve until the housekeeping employees become more comfortable with the technology.

According to Green, the newness of robotics to the hotel space—and to the housekeeping space in particular—is both exciting and a little scary. “We’re on the front-end of robotic innovation in the service industry. We’re painting the picture, we’re writing the rules. That puts a lot of pressure on us to get it right. At the same time, that means we are true pioneers,” he describes.

As such, the Maidbot team has been diligently working to update Rosie’s technology, software, and capabilities as new innovations become available. Over the past two years, her cleaning abilities have evolved to become more seamless and autonomous, and the team has added numerous safety features that weren’t even on their radar when Maidbot first launched. Additionally, Rosie’s user interfaces have been standardized, and a touch-screen has been added to display any messages that the hotel might want to communicate to employees or guests, which creates a more interactive connection with humans and the robots.

Other new features include updated sounds, which Green notes makes Rosie sound a bit like “R2D2’s girlfriend” but also make it easier for housekeepers to interact with the machine. “It really lends itself to the user experience, and helps Rosie communicate when a task is completed or something needs attention regardless of potential language barriers.”

These updates have also made Rosie useful in areas where she wasn’t originally intended to go—public spaces like guest corridors, meeting rooms, and ballrooms. When Maidbot first launched, these spaces were too big for a single robot, but now the robots can interact with each other to coordinate cleanings quickly and efficiently.

It’s also worth noting that Rosie doesn’t just clean, she collects data every moment that she’s working, then translates that data into actionable information for hoteliers. Green says, “It’s about being proactive versus reactive.”

He continues, “We’re cleaning every square foot of these rooms, and we’re discovering everything from mold to WiFi dead zones.” The ability to track WiFi was actually an unintended consequence of Rosie’s design; since she functions via WiFi connection, a weak spot interferes with her ability to do her job. “Some of our pilot hotels have really shored up their connectivity since bringing Rosie on board, which has helped their overall guest satisfaction,” Green adds. 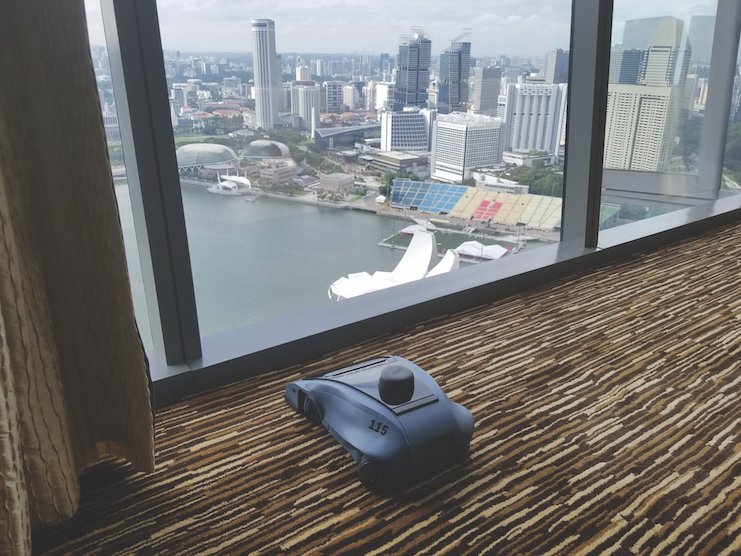 Now that Maidbot has a couple of years of field data under its belt, the company can more concretely describe its value proposition. First are the efficiency gains—on average, guestrooms can be cleaned 20 percent faster with Rosie’s assistance, and public areas can be cleaned up to 80 percent faster. However, Green says Rosie’s greatest value is tied to housekeepers’ overall health and wellbeing. “What I love is hearing from room attendants is, that at the end of the day, they have the energy to play with their kids,” Green says. “They’re still working extremely hard, but Rosie is taking a major task off their plates. Personally, the knowledge that these associates feel happier and healthier at the end of their shifts is perhaps what I’m most proud of.”

With such success, Maidbot’s growth has been exponential. Now Green has had to take a step back from the robotics side of the business to look at the company as a whole and scale up in a thoughtful and sustainable way. He’s been working hard to build the Maidbot team, seeking the best and brightest to help bolster Rosie’s technology and offer the greatest operational advantage to his hotels. “Experts say to hire people smarter than you or better than you to tell you what to do, and I really took that advice to heart as we grew our team. We’ve created an environment where people feel comfortable contributing to our mission. They’re not afraid to help me think differently, and that’s helped the company move forward faster than I had ever imagined.”

He adds, “Our team is incredible. I always like to make sure it’s not about me. It’s about the team. We would not be where we are today without every single person on this team. There are ups and downs, but we’ve pushed through that wall to have gotten to this point.”

Maidbot’s robots have been deployed in several properties, and the company plans to add a few more hotels to Rosie’s roster before the end of the year. But that’s only part of the plan; the company has generated growth projections based on a number of domestic and international contracts, and production of Rosie bots is on the rise (they’re made in San Antonio, just a few hours’ drive from the Maidbot headquarters in Austin, Texas). By 2020, there will be 2,000 Rosie units deployed across Maidbot’s portfolio.

And the company isn’t planning to stop there. In the future, Green hopes to expand into other industries and structures where Rosie could be helpful, such as hospitals and airports.

As the company continues to grow, every deployment of a Rosie bot brings new information that makes subsequent iterations more effective. Green adds, “We’re still at the tip of the iceberg, but with every meeting and group of deployments we have, we discover something new we can do.”