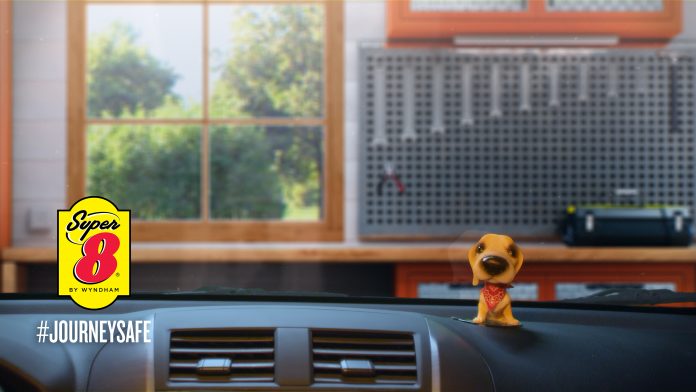 Today, Super 8 by Wyndham relaunched its award-winning #JourneySafe campaign. The reimagined campaign was released ahead of what is expected to be a busy spring and summer travel season and uses a PSA-style approach to promote safe and responsible travel.

Starring a team of dashboard bobbleheads led by “Coach,” #JourneySafe relays practical advice for travelers looking to hit the road, including tips about hand sanitizer, face masks, and pit stops. Actor and podcaster Oliver Hudson (brother of Kate and son of Goldie Hawn) joins the campaign as the voice of Coach. “I’ve always associated the open road with freedom and exploration, which is why I find this campaign so important—it’s about reinvigorating the all-American, road-warrior spirit while promoting practices that will continue to help keep all of us prepared, safe, and healthy,” said Hudson in a press release.

Mike Mueller, president, Brand Operations, Super 8 by Wyndham, says the relaunch of the #JourneySafe campaign was developed to dovetail with many of the initiatives that Wyndham Hotels & Resorts has launched during the pandemic promoting safe travel. “As people think about stepping out of their homes and taking that first trip since the start of the pandemic, they want to know that where they’re going is safe. That it’s going to be clean and sanitized. We want to make sure that if they’re going to take that leap of faith, that travel is safe, and that they’re going to the places that have invested in the right protocols,” he describes. “#JourneySafe ties in so nicely with the ‘Count on Us’ initiative that we launched last just over a year ago, which was about establishing new cleaning and training protocols at our hotels to make sure that guests see and feel that it is clean and safe.”

Mueller adds that this isn’t the first time that Super 8 by Wyndham has developed a marketing campaign around safe travel. “When we first launched #JourneySafe, it’s messaging was focused on drowsy driving. That was back in 2019. And it was really successful for us in showing that Super 8 cares about as much of your journey and how you get there as we do about staying with us,” he says.

The timing of the campaign is tied to a spike in interest regarding resuming travel. A recent survey from the United States Travel Association shows that 87 percent of American travelers are planning to take a trip sometime in the next six months. Mueller adds that the growing number of vaccinated people in the United States is influencing this trend. “I looked at the CDC website today [Editor’s Note: LODGING spoke with Mueller on March 29] and there have been 140 million doses administered already. And about 93 million people have had both doses if they’re getting a two-dose vaccine. People are starting to get more confident about traveling, so we knew the time was right.”

With industry recovery seemingly on the horizon, Mueller says that Super 8 is currently focused on ensuring that its franchisees are ready for the expected influx of travelers. “Coming into what we hope is going to be a robust peak season, we are working with our franchisees to help them establish rates, inventory, and get them ready to welcome travelers to their hotels once more. For example, lots of properties currently have rooms that are out of service, so we want our hotels to start introducing those rooms back into their rotation. Hotels are going to start selling out, and we need to be ready to receive those travelers.”