Home Design Skyline Lodge Guestrooms: A Retreat to the Mountains 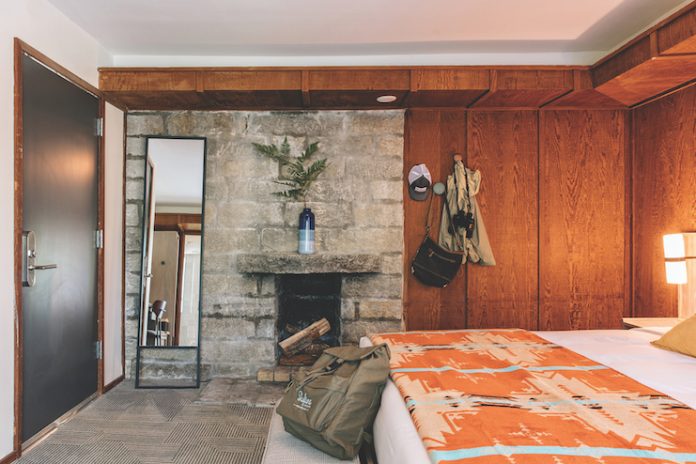 In the Blue Ridge Mountains of North Carolina, Skyline Lodge recently completed a refresh to the property originally built in the 1930s. Skyline Lodge has 39 guestrooms and one suite that evoke a modern sense for travelers of all generations to appreciate. Mey + Co Principal Carrie Dessertine led the property’s design with a twist on 1960s and 1970s aesthetics, patterns, and textural elements that complement the property’s architecture. Reclaimed wooden interiors and clean lines allow the surrounding nature to shine while paying homage to the mountains. Walnut furniture is used throughout the space to create a vintage aesthetic. Oak Steakhouse, a contemporary concept that serves fresh-cut steaks and local produce, has a beverage program that is designed to complement the restaurant’s menu. In addition to Oak Steakhouse, Skyline Lodge also houses Butlers Lounge, a centralized lobby bar with large fireplaces, lounge seating, and vaulted ceilings. Dessertine says the updates aimed to make the space “feel more modern and of the vein of the original architecture.” She explains that Mey + Co “tried to work with the original building as much as possible.” This meant retaining elements like the guestroom fireplaces and some of the hotel’s Prairie-style architecture. She notes, “We wanted to lean away from the rustic and let the natural textures of the views and the stacked stone of the building be the focus.”

The guestroom bathrooms have a penny-tile flooring that is colored in a way that gives more depth than a traditional penny tile, Dessertine says. As for the rest of the room’s flooring, she adds, “We selected the guestroom carpet because the pattern of the minimal linework has a stepping pattern and that is a recurring motif in the construction of the building itself.”

As greenery is important to the design of the Skyline Lounge, Dessertine adds, “As much as possible, we wanted the rooms to feel connected to the outdoors. All the views of the rooms are out onto the expanse of the surrounding forest, but we like to include greenery when possible inside. We have brought the greenery closer by using it on the terraces of the guestrooms.”

The fireplaces in the Skyline Lodge’s Kelsey wing are original to the building, Dessertine says, whereas the other wings are being outfitted with non-wood burning fireplaces to replicate the aesthetic. “The fireplace as an element always adds warmth, whether lit or not,” Dessertine explains.

The minimal use of patterns makes the property feel like home, and Dessertine says patterns were used “to draw together the various eras of the property. In a lodge, you always want to see a plaid because it automatically conveys the outdoors.” Some patterns in the property include “a gray-mustard plaid to clad the lounge chairs.”