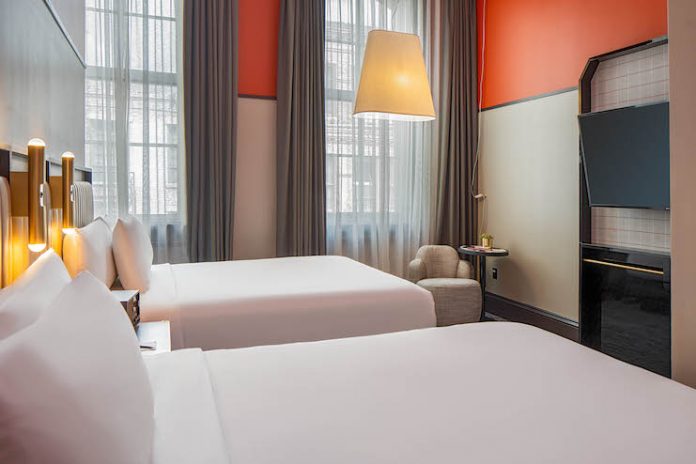 NEW ORLEANS—The 65-room Pelham Hotel in downtown New Orleans announced the completion of an extensive interior renovation, including a redesign of the lobby, guestrooms and bathrooms, guest corridors, and more. The renovation comes as a result of new ownership by AMS Hospitality, the hospitality division of Southeast-focused real estate development firm, Allen Morris Company, and Black Salmon, the Miami-based national real estate investment and development firm. The hotel is managed by HRI Lodging, LLC and with design led by Suomi Design Works.

“This renovation will provide guests with an elevated yet distinctly New Orleans experience,” said Allison Barnette, general manager. “Inspired by the property’s origins, we sought to preserve the hotel’s unique character while transforming spaces with the modern-day traveler in mind. From the moment they arrive, guests will be immersed in the rich history of the city while receiving the world-class hospitality that The Pelham is known for.”

Originally built in the 1800s, the Pelham Hotel’s design combines the building’s European influence with the city’s theater era and homes. The hotel’s furnishings, plasterwork, mirrors, and artwork are complemented by leather and natural woods.

The Pelham Hotel features pieces of art by local artist Page Goss, as well as a collection of art by Page Goss and designer Vanessa Watts of Watts & Gray. Representing the history of the city, Goss’ and Watts’ curations vary in techniques including salvaging art pieces and then reconstructing and reinterpreting pieces with the addition of fluorescent paint dripping down the canvases. Goss’ original works hang in the second-, third-, and fourth-floor guestroom lobbies.

The redesigned guestrooms contain decorative mirrors, vintage accents like Victrola radios, and a color palette composed of jewel tones mixed with contrasting colors such as orange and green. Tailored to the needs of travelers who prefer a balance of amusement and respite, the rooms feature 18-foot ceilings, exposed brick, and 10-foot-tall windows. The bathrooms have houndstooth wallpaper and custom shower curtains displaying people and places of New Orleans such as revelers and masqueraded couples in punches of color. Each guest bathroom has marble floors, granite vanity tops, and Grown Alchemist bath amenities.

Previously made up of several small spaces, the hotel lobby has been transformed into a lounge with shelves filled with craft liquors, wines, and treats reminiscent of a personal bar. Green canopies accented by signage top the front desk space inside the lobby. Featuring built-in ship lamps, along with black-and-white graphic trim, the bar seating is flanked with pendants that show the desk. The soffits and wainscoting create a sense of place, while group seating with an art collection is present.

Comings & Goings LODGING Staff - July 7, 2022
HP Hotels has named Mark Alvarez—formerly regional director of operations—chief people and culture officer, a newly established position for the company. He will be...