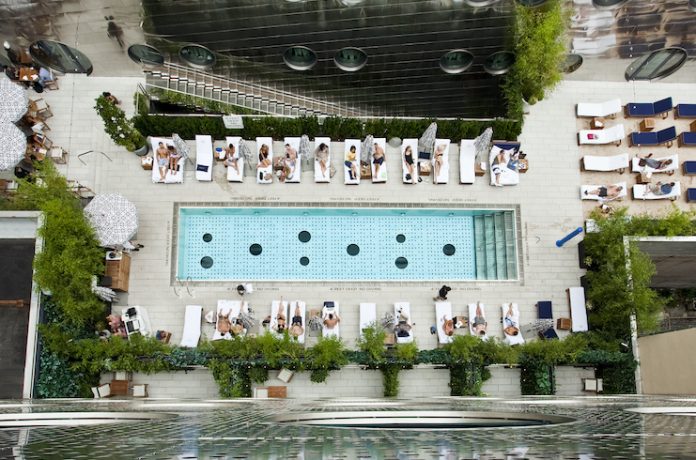 Dream Hotel Group CEO Jay Stein continues to support guidelines related to the COVID-19 pandemic—which, he mentions, are already in the process of being relaxed or lifted nationwide; but he makes no secret of his desire to get back to business, especially in what he calls “the one global city in this country.” Although the hotel brand and management company has a portfolio that spans the globe, Stein is especially excited about the recent reopenings of two of its branded New York City lifestyle hotels, Dream Midtown in New York’s Theater District and Dream Downtown in the Meatpacking District. He further hopes the powers that be will take a proactive approach to revitalizing the Big Apple for the many millions who live and work there.

Stein states the main question hoteliers have asked themselves since CDC guidelines have allowed for restricted openings: How will we lose less money—being open or closed? “We weren’t even thinking about how we could make money, but how we could keep operating,” he describes. He says, until recently, efforts to stay afloat included offering food and beverage to the local community and also maintaining contact with and providing health benefits for furloughed staff while waiting to bring them back. “We were aggressively figuring out solutions to work within the rules, including offering outdoor dining that included running a rooftop bar through the winter,” he recalls.

Stein hails the easing of restrictions that will enable restaurants to operate at full capacity and says the recent opening of the Dream Downtown has been a source of optimism. “Although promotional rates and occupancy—around 60 percent—were lower than is typical for the hotel, thanks to ‘bleisure’ travel—a combination of business and leisure—we’ll be ahead of what we projected.”

Stein, who has traveled extensively for business in recent months, says his own visits to airport terminals and properties suggest an easing of public opinion as well as of CDC restrictions. “Now that vaccination is more widespread and mandates allow it, people are more comfortable walking around outdoors without masks, flying on airplanes, and meeting in restaurants.” He describes his visits to properties after more than a year away as “kind of emotional,” saying, “People like having someone from corporate visit the property to see firsthand all the things they’ve been doing and the sacrifices they’ve been making. It’s nice to be together and have real face-to-face discussions.”

Stein says some of these discussions revolve around implementing incentives to get employees vaccinated and then marketing properties whose staff is 100 percent vaccinated as such. He says some markets, such as Nashville and Miami, are already hopping. “Our Dream South Beach in Miami will have its largest business month since it opened over 11 years ago in May.” Occupancy, while corporate travel remains depressed, is concentrated on weekends, but Stein says he is observing the return of small groups.

Looking ahead, Stein notes that Dream Hotel Group’s portfolio growth was not affected much by the pandemic. “One deal was canceled, but we signed five or six deals over the last 15 months. There was a slowdown in some projects because construction financing was not readily available during this time, but that’s starting to come back now,” he explains.

Stein expects, as more people are vaccinated and feel safe, normalcy—including business meetings—will be restored; and, with that bolstered confidence, he says he anticipates a return to 2019 occupancy levels sooner than the 2024-2025 period others are forecasting. However, he is especially concerned about what he considers to be a pressing need to bring people back to fill New York’s numerous corporate business and office towers sooner than later. “With people working from home, it’s not clear how many of those towers are not going to get filled up in the next 12-18 months.” Yet, he has faith that lingering pandemic problems will be resolved. “The world will keep evolving, and I’m confident that someone will figure out solutions for occupying structures and models, and things will again be vibrant at some point.”