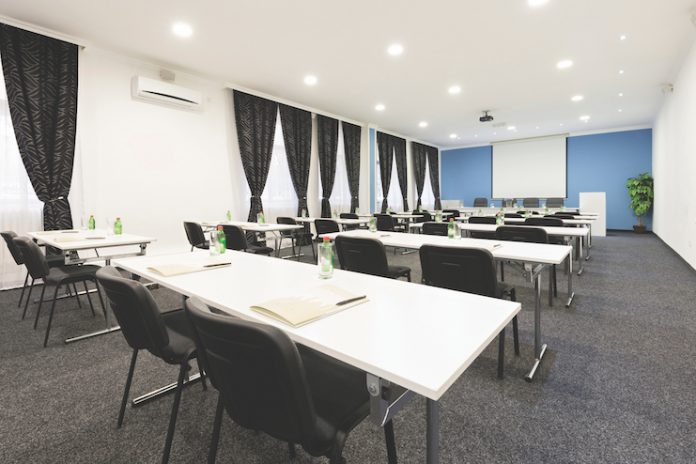 The negative impact of COVID-19 on group demand became more evident during the second quarter of 2020; group room nights were down 78.5 percent and group revenue was down 87.2 percent compared to the same quarter last year.

Because of their dependence on meetings, convention hotels have been hit the hardest by the decline in group demand during 2020. An analysis of convention hotels found that 56.4 percent of total operating revenue in 2019 was directly related to meeting-related business. CBRE defines convention hotels as properties with greater than 500 rooms and significant meeting space.

The negative impact of COVID-19 on group demand became more evident during the second quarter of 2020; group room nights were down 78.5 percent and group revenue was down 87.2 percent compared to the same quarter last year.

For convention hotels, 53 percent of rooms revenue can be attributed to group demand, but the impact extends beyond the rooms department. Within the food and beverage department, an estimated 71.9 percent of total department revenue is earned from banquets, meeting room rental fees, audio-visual fees, and service charges.

Because of the severe market conditions, CBRE is analyzing the monthly operating statements of U.S. hotels in 2020. Through August, the CBRE sample consisted of 1,800 properties across the country. Most convention hotels operate in the upper-upscale chain-scale segment, so we believe data for the upper-upscale category serves as a good proxy for the performance of convention hotels.

Through August of 2020, total operating revenue at upper-upscale properties had declined by 60.8 percent compared to the first eight months of 2019. As a result of the decline in revenue, the gross operating profit for the upper-upscale chain-scale segment has dropped 90.5 percent. More importantly for owners, earnings before interest, taxes, depreciation, and amortization (EBITDA) were down 133.9 percent from last year. This implies that the owners of upper-upscale properties are having to pay out of their own pocket to cover debt service.

In addition to the severe declines in operating performance, the high level of fixed ownership costs required to perpetuate the operation of a convention hotel exacerbates the negative impact on the owners of these hotels. CBRE analyzed the minimal fixed costs required to sustain hotel properties, even if the operations were closed. On average, the typical convention hotel in CBRE’s sample would require an outlay of $410,000 per month. This cash burn is before any rent or debt service payments. The monthly cash burn for convention hotels is the greatest amongst all property types, and 4.7 times the average across the CBRE sample.

Based on a sample of upper-upscale, convention hotels in downtown Boston, CBRE forecast food and beverage department revenues and expenses through 2029. CBRE’s Hotel Horizons forecast for upper-priced hotels in the Boston market was used to drive the demand levels at the hotels. Forecasts were prepared under two scenarios:

Under the low utilization scenario, upper-upscale food and beverage departments were able to generate a profit once again in 2023. However, department profit margin levels were not able to return to 2019 levels until beyond 2029. If local laws limit utilization and group demand is suppressed, operators may have to find alternative uses for their meeting space to generate revenues.

If local laws are relaxed and hotels are allowed high utilization of their meeting space, department profitability is achieved a year earlier (2022), and margins return to 2019 levels by 2025 or 2026.

In the short term, owners need to determine at what point cash flows from the operation of the hotel can sufficiently cover the costs to maintain the facility and operations, and thus justify the continued opening (or reopening) of the hotel. In the longer-term, operators will need to assess the proper utilization of their meeting space, which in part will be influenced by local laws and regulations.

*Kalibri Labs defines the group channel as a source of business that includes all room nights associated with multiple guests and guestrooms under the same booking, and have a group specified rate.