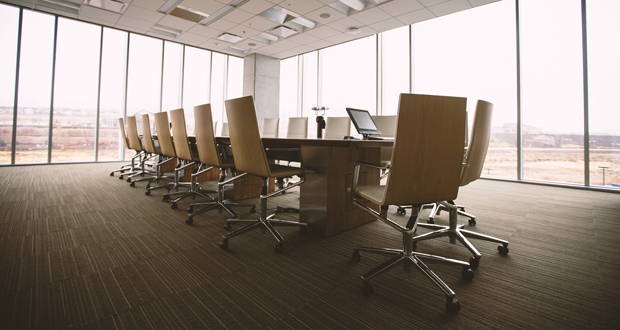 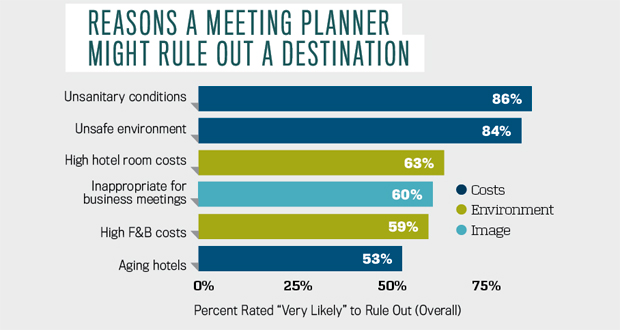 In the survey’s most recent iteration, which took place in spring of 2017, STR found that two-thirds of meeting planners rate “high hotel costs” as a reason to rule out a meeting destination. In fact, high hotel costs rank third—behind unsanitary conditions and safety—as planners’ greatest concern when selecting a destination for their meeting site.

Conventional wisdom suggests that markets rated as having high hotel costs by meeting planners would be the markets actually charging a higher average daily rate (ADR) for group business. To test this wisdom, the ratings of the 40 destinations evaluated were plotted against the actual 2016 group ADR for each destination. A “best fit” line was then applied to a scatterplot, yielding some results that contradicted the aforementioned conventional wisdom. The full version of this scatterplot is below. 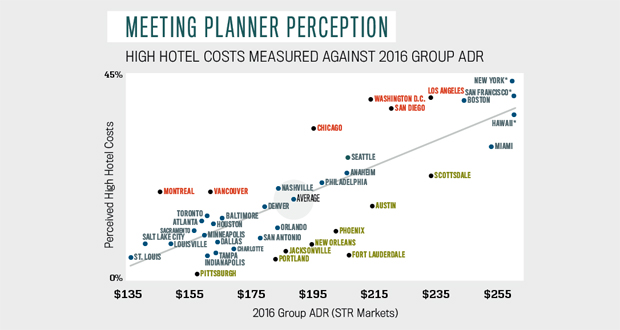 Most destinations followed a predictable pattern—the higher the market ADR, the more likely the market was rated as having high hotel costs. However, there were a handful of markets that did not follow this pattern:

The quadrant analysis in the scatterplot shows all 40 markets relative to the “best fit” line. The Group 1 and Group 2 markets are those that are significantly above (red) and significantly below (green) the line.

About the Author
Chris Klauda is the director of destination research at STR.