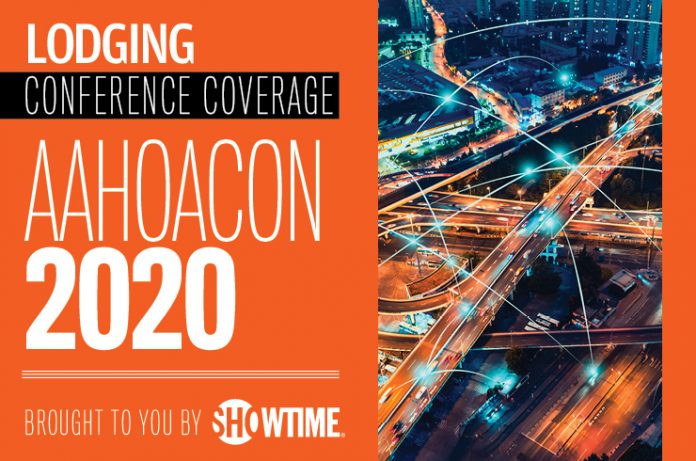 Patel noted that the lodging industry was the first to fall when stay-at-home orders and travel restrictions took hold and is expected to be the last to recover, but said, “We’re a resilient industry with tremendous leaders who have seen us through many challenges, including the industry experts here to discuss how state governments are approaching economic challenges from COVID-19 and how our industry will overcome them.”

Dover offered some sobering numbers reflecting the economic impact of COVID-19 on Florida, where tourism accounts for 25 percent of the state’s entire budget and 1.5 million jobs, while Jacobson focused on how limits on indoor gatherings hinder group business, which makes up 50 percent of total tourism revenue in Chicago. Longstreet described the pandemic’s hit to occupancy in Pennsylvania hotels. “At our trough, we had about 17 percent occupancy statewide, but by the week ending July 20, we were back up to about 42 percent statewide; this time last year it was 78 percent.”

All said their states are striving to keep as much of their population’s tourism dollars in state as possible. Toward that goal, Dover said, there is a higher level of reassurance from the FHRA’s longstanding Seal of Commitment program, which has added COVID-19 training, and “amazing packages for Florida-based families” through the Visit Florida destination marketing organization, which previously marketed outside the state, as well as FHRA. Jacobson, who says Illinois depends more on summer tourism than the warmer states, says it, too, is striving to keep its residents in-state for vacations, and reported that some drive-to markets are nearing 50 percent occupancy, although Chicago is still under 20 percent.

Asked about the urgent concerns of hoteliers in their states, Jacobson mentioned the need to ease restrictions on group travel, avoid raising labor costs, and provide tax relief, saying, “Although it’s not realistic to provide full tax forgiveness in Illinois, we’re looking into things like tax deferrals, stretching out scheduled payments, and reassessing hotel values.” Dover shared Jacobson’s concern about labor costs. “Amendment 2 in Florida will raise our minimum wage to $15 an hour, raising our payroll by 75 to 78 percent, virtually guaranteeing that thousands of establishments won’t be able to keep their doors open.”

All seek to nurture their relationship with their state powers that be. As Longstreet described, “While we may have disagreed with some of [Pennsylvania] Governor Wolf’s orders, we were able to work with colleagues from both sides of the aisle to convince him of the things we think are important for the safe operation of hotels and restaurants.” Jacobson, too, supported using a cooperative approach over a contentious one likely fail. “Though people’s livelihoods are at stake, we need to keep in mind a long-term strategy and continue developing those relationships.”

All stress the importance of trade associations in the fight to have their concerns heard and addressed now that there are fewer resources and a greater need for communication. As Jacobson put it, “I think the role of associations, in general, is to do as a group speaking with one voice what members can’t do with disjointed efforts.”

President and CEO Ken Greene Will Leave AAHOA in February