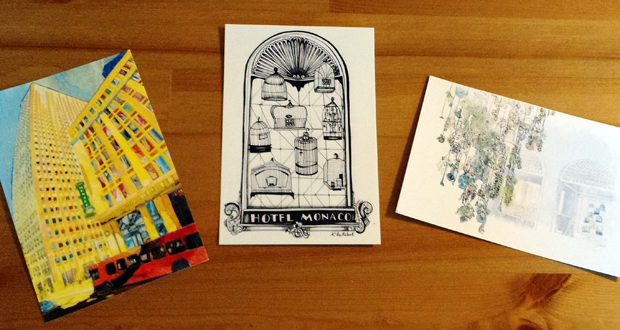 This summer, Kimpton Hotel Monaco Pittsburgh is partnering with local artists to encourage guests to unplug and revisit the art of handwritten travel postcards. The downtown boutique hotel invited three Pittsburgh-based artists to wander its whimsical and adventure-inspired space in the city’s iconic Beaux Arts-style James H. Reed Building to draw inspiration for concepting and creating the custom pieces for the hotel’s official postcards.

The postcards are available to guests in the hotel’s living room “writing station.” Originally established as a love letter station this past Valentine’s Day, the initiative’s success sparked the idea of creating hotel-inspired postcards, which guests can pen to their loved ones and drop in a designated mailbox for the hotel to mail.

The Kimpton Hotel Monaco Pittsburgh’s General Manager, Rob Mallinger, says that the idea came from the hotel’s own practice of greeting guests with handwritten and personalized notes. “We always look for the personal touches here,” says Mallinger. “Sometimes guests just want to communicate with friends and family. We like to see them take a break from their mobile devices. We think the art of writing a postcard is very meaningful—it’s authentic, it’s personal, and it really shows that guests are giving of their time and care.” Mallinger adds that he hopes the unexpected piece of mail puts a smile on the recipient’s face, and that the artwork on the postcards inspires recipients to visit the hotel some day.

“We were looking for artists who were local and might be inspired by the hotel, the building, the style, and what we do here,” explains Mallinger. “Each of the artists visited the hotel, used the space and the people for inspiration, and then we really let them run free and design their postcards how they saw best fit. We had no artistic influence whatsoever, and it was really neat to see how they came out so differently.”

The postcard art shows some of the hotel’s eclectic pieces, such as its birdcages and hanging, silk-flower garden in the lobby, all of which are meant to create a feeling of walking into the home of a world traveler and collector. Another design is inspired by the nine-story building’s exterior, originally built in 1903, in the city’s downtown. The hotel plans to use these postcard designs for the next year, and then invite three more local artists to create new designs as part of an ongoing program.