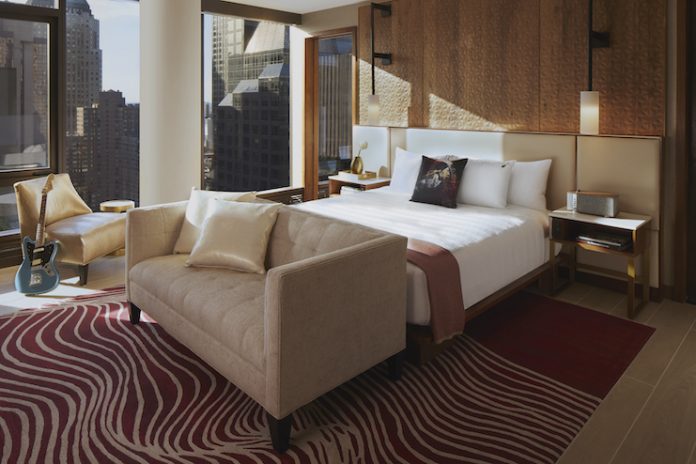 “New York City is one of the greatest cities in the world and we are honored to open our doors to locals and travelers looking for a best-in-class hotel, dining, and entertainment experience,” said Jim Allen, chairman of Hard Rock International. “Hard Rock has had a presence for decades in the City, but this location will deliver an entirely new experience from the brand that’s been synonymous with music and entertainment for over 50 years.”

As part of a partnership between Hard Rock International and Audacy, Hard Rock Hotel New York is home to an Audacy Live performance studio and entertainment hub. A series of recording sessions, live events, and performances from artists will be featured on an ongoing basis.

The Venue on Music Row is the hotel’s entertainment space spanning two floors inspired by New York from an era when jazz clubs, speakeasies, and dinner-theater performances were popular. The Venue is set to host entertainment performances as well as fashion shows, after-parties, and gala dinners.

Hard Rock Hotel New York features 446 guestrooms and suites offering floor-to-ceiling windows. The rooms are designed with blue tones and gold accents, which are inspired by the city lit up at dusk. Guests will find imagery of artists printed on glass doors along with sound wave carpet patterns and sculptural artwork above the headboards. With a variety of room types ranging from King Rooms to Platinum Suites with terraces, each has Kimono robes, Lavazza espresso, Rock Spa bath products, and WiFi.

Sitting atop the 36th floor is the Rock Star Suite, a glass-enclosed penthouse with artwork, music memorabilia, and a terrace of 1,600 square feet. The interior design includes double-height ceilings and tones and textures. On its first level, the suite has an open-plan living and dining area with a bar and butler pantry, an outdoor bar, VIP direct access to the RT60 rooftop bar and lounge, and more.

A multitude of culinary and cocktail concepts are in the hotel, including fine dining at the NYY Steak in partnership with the New York Yankees, the brand’s all-day Sessions Restaurant & Bar, and RT60 Rooftop.

At NYY Steak, Mozambique wood-paneled walls have autographs from players while steaks, local market seafood, and main dishes are served on plates inscribed with player numbers within the franchise insignia. NYY Steak is open daily.

Sessions Restaurant & Bar represents New York, serving fare for breakfast, lunch, and evening bites. Located on the main level and accessible by a staircase from the street, the atrium with a terrace offers live musical performances. And RT60 bar and lounge is located on the 34th floor and serves cocktails and shareable bites.

Guests are greeted by an expression of music, transporting them to an atmosphere that exudes the entertainment energy of New York with the culture and history of Hard Rock.

Spearheaded by design firm Jeffrey Beers International, the expression of music is layered throughout the hotel. In each space, there is a homage to music, such as guitars and brass wind instruments, music notes, and sound waves. Materials include dark woods, marbles, brass finishes, and tactile leather and velvet fabrics. The rich color palette features the property’s signature blue, browns, golds, and brass, and pops of metallic silver, greens, and reds.

Hard Rock memorabilia is displayed from artists across generations and genres including a leather motorcycle jacket owned and worn by Joey Ramone; a pair of silver patent leather boots worn by Lady Gaga; handwritten lyrics for John Lennon’s 1972 ode to “New York City,”; and custom outfits from Jay Z and Beyoncé among other pieces.

A variety of brand experiences and amenities can be found in New York. Amenities include the Sound of Your Stay, which allows guests to listen to Tracks curated playlists inspired by the city they’re in, Crosley record players available upon request with Wax, or play a Fender guitar with Picks in the privacy of their room. The Unleashed pet program will welcome four-legged friends to enjoy the same experience as their pet parents. Guests are invited to exchange the city map for Soundtracks interactive area guides.