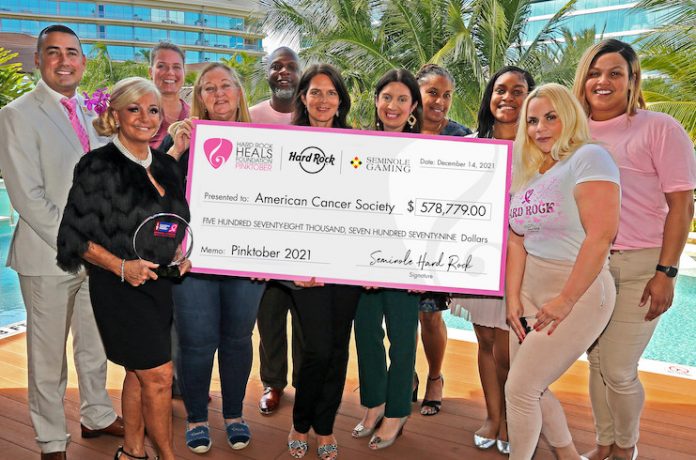 “We are thrilled to announce that in the 22nd year of the PINKTOBER campaign we were able to break our fundraising records to continue in our steadfast support of breast cancer awareness and research,” said Jon Lucas, chief operating officer of Hard Rock International. “It’s amazing to watch our company divisions come together and put their hearts into fundraising efforts. We hope that in addition to raising money we’re also able to amplify the message of courage and hope among fighters, survivors, and their loved ones.”

“Despite the unprecedented challenges we faced in 2020, the American Cancer Society continued to advance our mission to save lives, celebrate lives, and lead the fight for a world without cancer—in every community, for all people,” said Senior Executive Vice President, Field Operations, Brant Woodward. “We are so appreciative of Hard Rock and their continued support of our work to care for people facing breast cancer. Thanks to supporters like Hard Rock, there are more than 3.8 million breast cancer survivors in the United States today. ”

At participating Hard Rock Cafes, $1 from every limited-time PINKTOBER burger sold went towards the cause amounting to more than $60,000. The three PINKTOBER burgers—the Mushroom & Bourbon Onion Burger, the Ultimate “Pub” Burger, and the Blue Cheese & Bacon Burger—will be added to the permanent menu this month.

Sales from this year’s PINKTOBER-themed Hard Rock t-shirt and PINKTOBER pin raised more than $35,000. Additionally, players on Hard Rock Digital’s free “Hard Rock Social Casino” game determined how much was donated in honor of PINKTOBER. The more players spun, the more the donation amount increased for a total of $10,000 raised benefitting the American Cancer Society.

Hard Rock continues to support Breast Cancer Awareness Month, with the goal of lending a hand to the people and communities that need it most.