Conversations in the hospitality industry in 2017 revolved around the impact of new supply and slowing average daily rate (ADR) growth. The extended-stay segment has not been spared from new supply, but it has continued to post strong performance results. 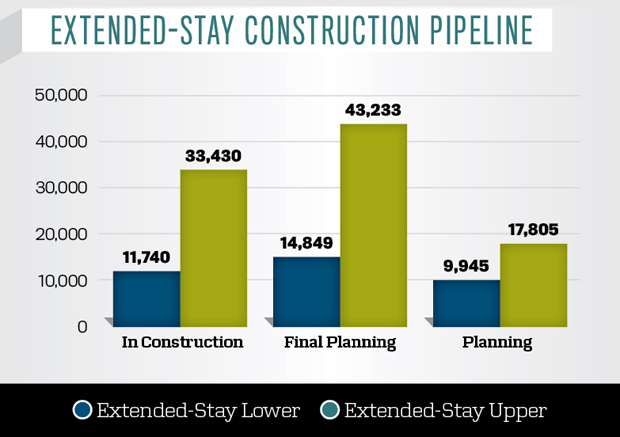 Lower-tier extended-stay hotels experienced relatively strong rate growth in 2017, pacing above the national average of 2.1 percent for November YTD. Neither lower- nor upper-tier extended-stay hotels saw considerable occupancy increases, but growth is hard to come by when both segments are running at almost peak occupancy levels. And the upper-tier segment faced a 10.1 percent increase in supply during the period. However, demand—at least for now—was there to match the substantial growth in new supply.

The segment will continue to expand in 2018. According to STR’s November 2017 pipeline, there are 45,170 extended-stay rooms under construction. Another 85,000 rooms are in the planning and final planning stages, with the overall pipeline representing a 29.9 percent increase in existing supply. Similar to other hotel products, the majority of construction is concentrated in the top 25 markets. The top five markets with the most extended-stay rooms under construction are Dallas, Houston, Washington D.C., Orlando, and Nashville. Developers have shown an increasing desire to build upper-tier extended-stay properties, with the segment’s supply growing over 5 percent on a trailing 12-month basis for 3.5 years. 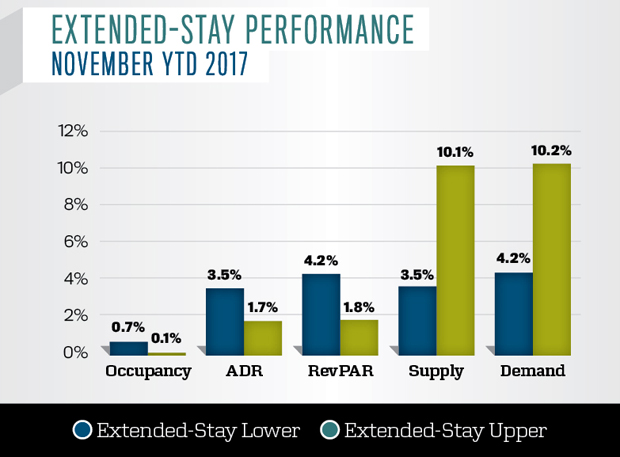 STR is forecasting slow and steady RevPAR growth to continue throughout 2018 at an annual pace of 2.5 percent. With the new supply coming online in 2018, it’s reasonable to assume that the extended-stay segment could see occupancy declines and less pricing power. Almost half of extended-stay hotel rooms are within the upscale chain scale, for which STR is forecasting 1.1 percent RevPAR growth in 2018. As far as lower-tier extended-stay, where the majority of properties are classified as economy, the economy chain scale is expected to outperform other segments in 2018, with 2.9 percent RevPAR growth driven by limited new supply.

About the Author
Ali Hoyt is senior director of consulting & analytics at STR.