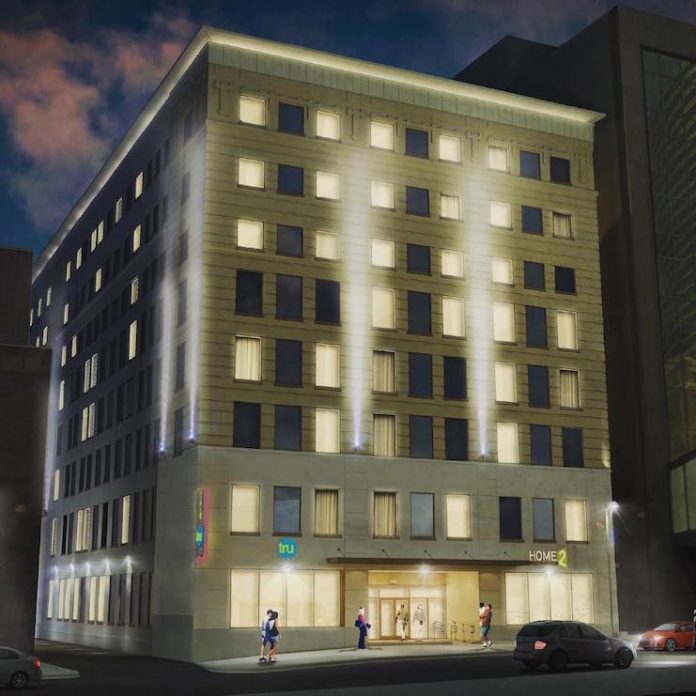 “To our team, it’s an honor to bring both of these hotel flags to Minneapolis for the first time,” said Damen Trebilcock, vice president of development at Hawkeye Hotels. “With this unique, historic structure as the backbone of the project, we are focused on preserving its integrity at the same time that we modernize some key aspects of the building.”

The structure dates back to 1900 and is located at 317 Second Avenue South, alongside the City of Lakes Building and Tritech Center.

“Adding onto the existing structure allowed us to develop the first dual-branded hotel in downtown Minneapolis,” said Prince Bhakta, development manager at JR Hospitality. “This will give our guests the unique opportunity to experience both the Home2 and Tru brand within the same building.”

Previously known as the Western Union Bank Building and the William E. McGee Building, the structure served as the Public Defender’s offices for Hennepin County until 2012. Since then, the property has sat vacant.

With a total of 201 rooms, the eight-story, dual-branded hotel will include a fitness center, business center, and free high-speed wireless internet. The Home2 Suites rooms will include fully equipped kitchens.

The architecture firm behind the vision for this rehab is Ramaker & Associates, Inc. Hawkeye Hotels is a family-owned hospitality company that today owns and operates over 50 hotels across the country. JR Hospitality is a third-generation hotel company that specializes in acquiring, developing, and operating premier hotel assets in the Midwest.