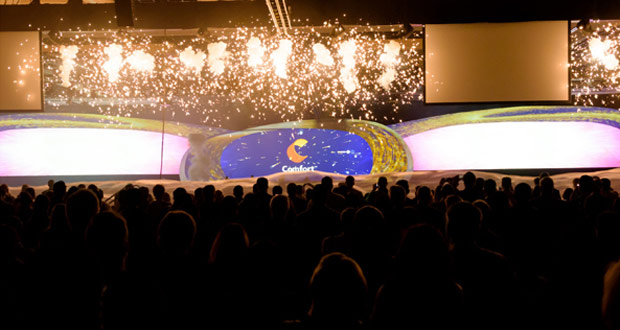 Last week, more than 6,000 people—including owners, developers, managers, vendors, and Choice Hotels corporate team members—met at Mandalay Bay Resort and Casino in Las Vegas, Nevada for the company’s 64th Annual Convention. The first convention helmed by Choice Hotels’ new CEO Pat Pacious saw some big announcements, like the unveiling of a new logo for the company’s flagship Comfort brands, and was packed with opportunities for attendees to network, learn, and better their businesses.

One thing was clear from the convention’s opening Corporate Business Session—Pacious has made it his mission to get to know Choice franchisees on a deeper level and is looking to develop initiatives and programs that meet their needs across all of the company’s brands. “My commitment to you is to keep making bold moves, to learn quickly what’s working and where we can do better, and never stop listening,” he said during that session.

Setting Franchisees Up for Success

The 2018 Convention theme—“No Limits”—could be seen throughout much of its programming, but especially in the 130 education sessions offered to attendees. According to Pacious, there were between 12,000 and 13,000 individual registrations for educational courses during the Convention. Educational options included everything from webinars to a virtual training program, to puzzle games meant to teach attendees how to onboard new members to the Choice Privileges rewards program.

Choice Privileges was another major focus of the convention. More than 5 million people joined the program over the last 12 months, and users have enjoyed new additions to the program, such as instant rewards—like Starbucks gift cards—that can be redeemed immediately upon check-in.

Pacious said that the steps the company is taking to better support their franchisees are having a very positive effect on Choice’s growth, and that owners are taking notice of the new programs and updated systems. He mentioned that two-thirds of the franchise agreements signed over the last year for new Choice properties were with existing owners who were pleased with Choice’s infrastructure and processes.

Perhaps the biggest announcement to come out of Convention this year was that Choice’s Comfort brands now have a new brand image. “We have been looking forward to announcing this for a while,” said Anne Smith, Choice’s vice president of brand management and design. “The reimaging of Comfort represents a transformation that has been going on for the last five to seven years. This is about the next chapter, this is about helping owners take credit for what they have done to improve their product. This is about bringing back lapsed users to our brand, about continuing to delight the Comfort users that love us so much today.”

The sleek “C” logo, which debuted to fanfare and literal fireworks, now represents the Comfort Inn, Comfort Inn & Suites, and Comfort Suites brands. “Our mission was clear,” said Megan Brumagim, head of Comfort brands, Choice Hotels. “We had to unite and lift the Comfort family, and do so in a way that maintained our universal brand awareness and preserved guests’ premium perception of Comfort Suites.”

While the new logo debuted at Convention, Comfort hoteliers will only be able to put the new logo on their hotels after they complete the brand’s latest PIP, Move to Modern. All Comfort hotels were required to execute Move to Modern designs in their common spaces by the end of 2017, and in their guestrooms by the end of 2019, so many hoteliers are well on their way to completing this goal. Smith explained that this decision was part of an ongoing incentive program to encourage Choice hoteliers to update their properties as quickly as possible. “The signage in and of itself is an incentive to finish. You can’t get the sign until you are fully up to date in Move to Modern,” Smith explained.

Another hot topic at this year’s Convention was Choice’s focus on its upscale brands, Cambria Hotels and the Ascend Soft Brand Collection. “We’ve had phenomenal growth in 2017, and we’re continuing that exponential growth in terms of deals, ground breaks, openings from both our Ascend Collection as well as for our Cambria hotel brand,” Janis Cannon, senior vice president of upscale brands, described.

In terms of Cambria, Mark Shalala, vice president of development for upscale brands, said that the desire to create organic touchpoints for guests was key in developing new properties. “The idea of building the same sort of plain, sort of vanilla box from market to market, that’s over—at least in the upscale segment. People want to experience the vibe, the culture, the food, the music of the cities they’re visiting, and the hotels we’re building are sort of the gateway to those cities,” he explained.

It was also announced that the Ascend Collection added 48 hotels to its portfolio in the last year, increasing the brand’s portfolio to more than 200 properties and further strengthening Choice’s position in the upscale sector.

Of course, many at the Convention were eager to discuss Choice’s acquisition of Woodspring Suites, a deal that was finalized in early February. The acquisition nearly tripled Choice’s extended-stay portfolio. During the extended-stay brand session, there was much discussion around the possibilities inherent in the extended-stay segment, especially at this point in the lodging cycle.  “Extended stay is completely unique in its capacity to generate profits and outsize potential for ROI,” Pacious said.

Ralph Thiergart, vice president and general manager of extended-stay brands for Choice, said that consumer awareness of the extended-stay segment is on the rise, which puts Choice in a very advantageous position, especially considering it has three brands that fit into this space. “We happen to believe that there’s a lot of opportunity in economy and mid-price, and that’s why we’re doubling down on those categories,” he said.

Thiergart also said that there’s a huge demand for dual-branded extended-stay properties, which in turn is ensuring each of Choice’s extended-stay brands stay in their own lanes. “For example, dual-branding for Mainstay [Suites] has been a really successful path. We love, love, love the opportunity for pure-play extended-stay with Mainstay as a standalone, but we’re equally proud of the fact that Mainstay is flexibly designed enough that we can also pair it with our Sleep Inn brand. It gives us a dual-brand option,” he explained, adding that by pairing Mainstay Suites with Sleep Inn, Choice hoteliers are able to ensure their properties are playing in their proper segments.

Looking to the Future

While the past 12 months have been busy for Choice, that doesn’t mean the company is slowing down. Pacious noted that there is a lot of white space in the company’s portfolio, and they’re always looking for opportunities that make sense for the company, its brands, and its owners. “There are really two things we look at when we look at an acquisition. One, how can I improve the return for the owners of those assets? If I can do that, that’s going be a deal we look at. And two, how can I improve the equity holders of Choice Hotels? Can I grow the brand? We do that today with our existing brands. We’re growing all of them. We’re growing the RevPAR in all of them, and that ultimately leads to those customers coming back,” he said.

Women Own the Room Program Introduced by Wyndham Hotels & Resorts