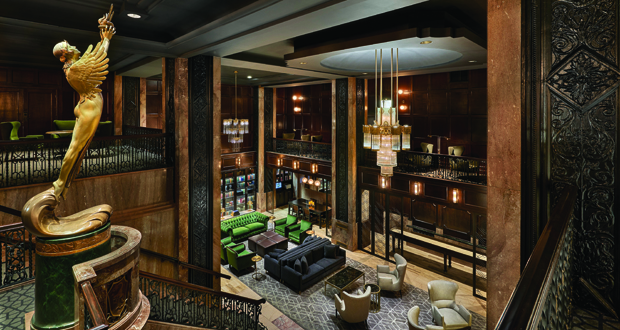 In the 1930s, Kansas City, Mo., was a central hub for U.S. travelers flying from one coast to the other. During this era, air transportation signified a certain amount of wealth, and opulent hotels emerged in Kansas City to meet the demands of these affluent travelers. One such property was Hotel Phillips, which first opened its doors in 1931. The hotel attracted guests both then and now with its historical grandeur, which was recently restored with help from designer Kraig Kalashian, who concentrated on classic and timeless sophistication, but added contemporary elements.

Now a Curio Collection by Hilton hotel, the 216 guestrooms and suites have been completely updated. The Art Deco property is listed on the National Registry of Historic Places, and upgrades reflect the architecture and façade from the hotel’s original opening. The expanded lobby maintains elements from the original. Kalashain says, “Nobody wants to stay in some false façade of a place. They want the actual thing. We’re keeping all the great attributes and then enhancing them with contemporary details.” 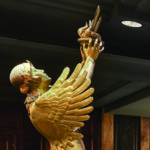 Focal Point
This prominent statue was installed shortly after Hotel Phillips opened and has been gazing benevolently over the lobby ever since. “The statue symbolizes rebirth and represents the era of innovation and entrepreneurship that Kansas City experienced during the 1930s,” Kalashian says. 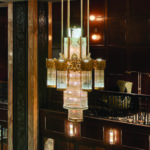 Chandelier Duplication
When the restoration began, there was only one chandelier in the lobby. Kalashian added a second one to brighten up and add some balance to the space. The chandelier pictured here (on the right in the top photo) is the original! 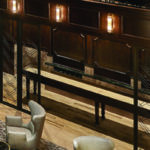 Old-Time Games
A 1930s-inspired shuffleboard now sits in an alcove that used to be home to the check-in desk. Kalashian says, “Now, people go there and get a drink, play shuffleboard, and hang out. 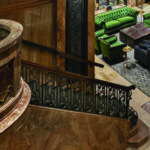 Memorable Marble
The marble staircase is made of local stone that was quarried in the 1930s. When updating the property, the age of the existing marble structures made it impossible to find an exact match for the renovated areas. “Luckily, we were able to find a pretty close match,” Kalashian says.