Home People Birth of a Market Segment: The Story of Days Inn 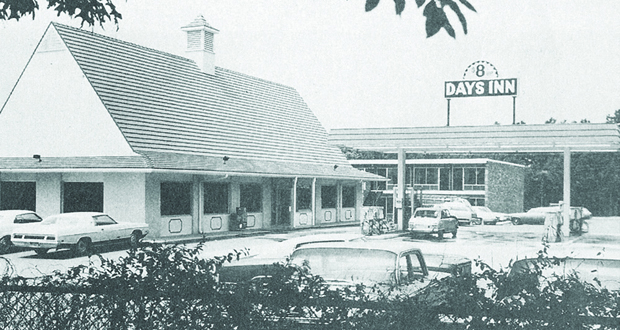 The story of Days Inn starts with a family vacation in the late 1960s. After future hotelier Cecil B. Day sold his real estate holdings in Georgia, he celebrated by loading his family into a station wagon and setting off on a cross-country trip. What he soon discovered was that there were few hotels along the highway that were moderately priced and clean, and finding a place for his family to sleep was much more difficult than he anticipated. It was on this fateful trip in 1969 that Day, who had never operated a hotel, decided he would enter the lodging business.

Whether due to his inexperience or stubbornness, Day decided to open his first Days Inn on Tybee
Island, Ga., a location he was told would not yield success for the property. But Tybee Island proved to be the ideal place for a Days Inn, and he soon opened a second location in Forsyth, Ga. By 1972, Days Inn had sold its first franchise. After 10 years of franchise-related growth, there were close to 300 Days Inns. These properties were located largely in the Southeast, but there were also several in the Midwest and a few in Texas and California.

Day’s franchising methods included signing up independent hotel operators as well as offering franchisees reduced rates compared to the other lodging chains. In the first five years, the company doubled in size every year. Day concentrated the growth along the interstate highways and placed Days Inns in small towns often overlooked by the larger chains. He avoided the larger cities, seeing little to gain in markets already served by other hotel brands.

Beyond Day’s franchising acumen, there were many elements that led to Days Inn’s phenomenal growth. First was Cecil Day’s optimism and faith in his concept of affordable lodging. This dovetailed with his often-quoted philosophy of “find a need then fill it.” Day had discovered a new segment of the hotel industry. At the time, large hotel chains that catered to the traveling public were pricing themselves beyond the means of many travelers.

By offering fewer frills at a lower price, Days Inn discovered a market segment that is lucrative to this very day: Budget travelers who want safety and consistency. Day would refer to his hotel guests as “value-conscious travelers.” Days Inn eliminated lobbies, convention facilities, room service, and bell hops, and it offered a swimming pool for families, a playground for kids, plus a restaurant and gift shop. Most of these were amenities that he would have welcomed during his 1969 vacation. Days Inn also offered senior citizen discounts, tapping into that growing market. Due to his Christian faith, Day also placed Bibles in guest rooms and encouraged guests to take the book with them when they checked-out.

Unfortunately, at the height of his lodging success in 1984, Cecil Day died of cancer. Later, in September of that year, the company was sold to Reliance Capital Group. In 1992, one of the antecedents of Wyndham Hotels, Hospitality Franchise Systems, purchased Days Inn. Today Days Inn is one of 20 brands in Wyndham’s portfolio, and can be found all over the United States.

A Look Back: The Accomplishments of Curt Strand